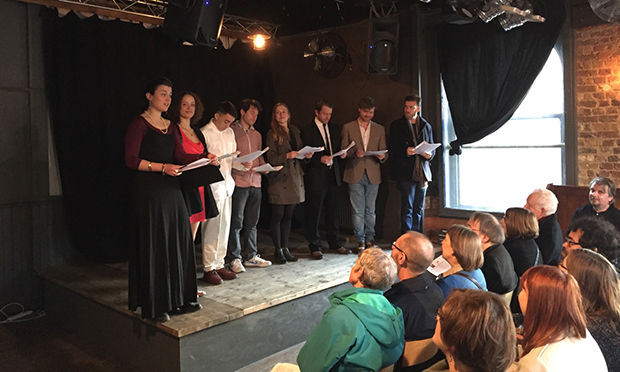 The Shakespearean Curtain Theatre in Shoreditch was the focus of a lively drama and history afternoon on Saturday 21 July exploring the social significance of the Elizabethan venue.

Put on by academic theatre historians together with The Dolphin’s Back theatre company, the Museum of London Archaeology (MOLA) team, and the property developer that owns the site, the event took place at Hackney House, adjacent to the theatre’s Shoreditch home.

A series of short drama performances, talks and interactive activities were staged by the Before Shakespeare project, led by Dr Andy Kesson at the University of Roehampton.

Built in about 1577, discovered by archaeologists in 2011, and excavated in detail in 2016 by MOLA, the Curtain Theatre was briefly home to Shakespeare and his fellow thespians.

A thatched building set in fields (convenient for post-performance assignations), it enjoyed a reputation for ribaldry, debauchery and licentiousness.

This reputation was only partially deserved, however. True, theatre performances were bawdy and at times violent events where lords mingled with sex workers, tradespeople and ordinary members of the working class.

But the reputation that attached itself to the Curtain theatre was largely a reflection on the role of stage performances in Elizabethan society in general, associated as they were in the popular mind with vice, criminality and other unsavoury behaviours.

Yet theatre also represented opportunities for political commentary and the questioning of established practices. At the turn of the 17th century, the public discussion of politics was severely restricted; in this context, plays were a useful way of exploring delicate social and political themes.

Shakespeare was one of the more conservative playwrights of his day, whereas other theatrical offerings were bolder and more subversive of social mores.

To demonstrate this, Kesson and his team are preparing to stage a production of Galatea, a play about two women who fall in love, whose central characters have some form of sexual contact off stage, and marry with the blessing of Venus, goddess of love.

Kesson explains that the archaeological uncovering of the Curtain has had major impact on our understanding the social role of Elizabethan theatre: “this playhouse has exploded everything we thought we knew about playhouses”.

Unlike the round Globe on the South Bank, the Curtain was long and rectangular, facilitating displays of fencing, which were also a popular spectacle of the time, and which were demonstrated with frightening dexterity by performers at the Saturday event.

The Curtain’s excavation has also revealed the social diversity of those who frequented the playhouses. Shoreditch was at the time home to an unusually wide social mix, including numerous people from foreign lands and those of colour.

The archaeological evidence helps confirm Kesson’s view that the theatre of the time ‘was a working class movement, targeting the working class”.

In the Elizabethan day, theatres were often run by grocers who staged plays in order to entice their customers to linger, consume and spend.

In this respect, Shoreditch has not changed. In 2021 the Curtain Theatre site is set to be incorporated into a luxury housing and retail complex. The remains of the theatre are being preserved in situ and will open for public viewing.