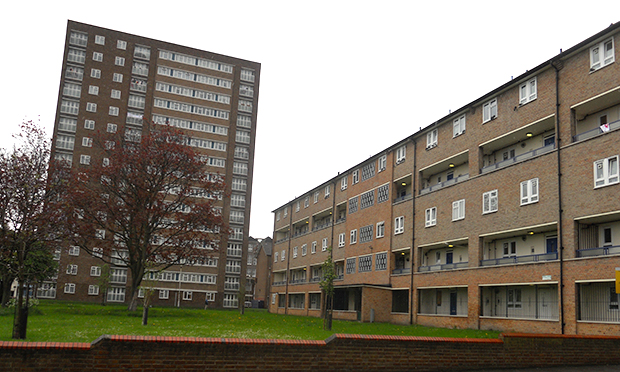 An elderly man and woman had to be rescued this morning after a fire broke out on the 10th floor of a council tower block in Hackney Central.

Thirty-five firefighters attended after a resident in the Trelawney Estate on Paragon Road called 999 at 8.13am today.

The woman made the call after her smoke alarm went off, but the cause of the blaze is still unknown.

Station manager Matt Burrows, who was at the scene, said: “The resident of the affected flat acted quickly and did exactly the right thing.

“Upon hearing her smoke alarm and discovering the fire, she got out, closed the door behind her and called 999.

“Around 60 people left the building before the arrival of the Brigade. A number of further residents remained in their unaffected flats.”

Firefighters wearing breathing apparatus led an elderly man to safety from the 9th floor and rescued an elderly woman from the 11th floor.

Both were treated at the scene by London Ambulance Service crews.

Part of the flat on the 10th floor was damaged by fire.

The London Fire Brigade says the blaze was under control by 9.20am, and that an investigation into its cause is ongoing.