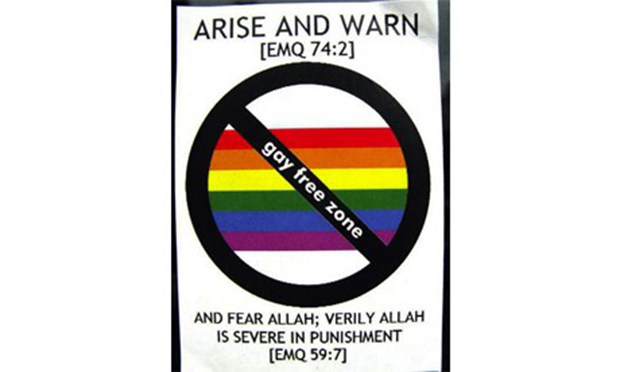 Hate crime: ‘gay-free zone’ stickers appeared in Shoreditch and Stoke Newington back in 2011.

The consultation ran from 15 January to 23 March 2018 and outlined a range of strategies the council plan to introduce to tackle this crime.

The council stated that, whilst articles about the consultation were published in Hackney Today, the council’s freesheet that is delivered door-to-door across the borough, and also in the Citizen, the consultation garnered just 69 responses.

The consultation was also widely advertised through the council’s social media channels.

Over 85 per cent of the consultation respondents [i.e. 59 respondents] agreed all the hate crime strategy objectives.

One respondent said: “I reported a hate crime directed against me and my partner to our housing association. They responded that they doubted it was a hate crime.

Other respondents highlighted the importance of raising awareness of the crime in “stalls outside shop restaurants, places of worship and schools”.

Many also pointed out that hate crime was about more than race and that people in the borough are attacked because of their “gender, religion, disability or deafness”.

“Instead of just building understanding of hate incidents and crime, I’d suggest celebrating differences, for instance organising multicultural events or a neurodiversity festival,” another respondent added.

The council said they will consider the results of the consultation and the draft strategy will be amended in light of some of the feedback received.

There were 3,593 hate crimes reported in Hackney between April 2016 and April 2017, an increase of 332 compared to the previous year, according to the Metropolitan Police.

Many of these offences were committed in hotspots such as Stoke Newington Police Station, Shoreditch as well as at shops and health centres.

The council’s strategy notes that Hackney is a diverse borough, with its 269,000 population including many black, “other white”, Turkish, Kurdish, Muslim and Jewish residents.