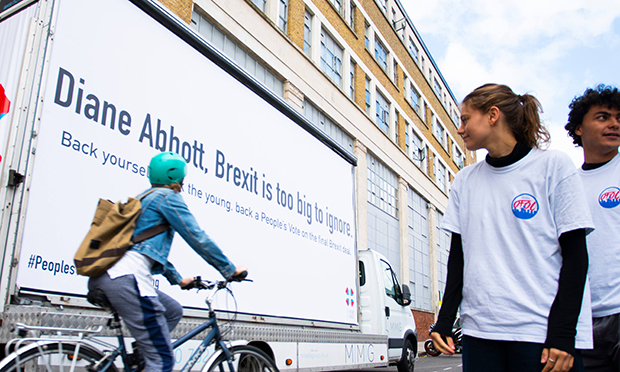 A pro-Remain youth movement yesterday called on Diane Abbott to support a “people’s vote” on Brexit – driving home the point by touring the Hackney MP’s constituency in an advertising van.

It was part of a day of protests, organised by campaign group Our Future, Our Choice (OFOC), targeting senior Labour figures, including shadow chancellor Jon McDonnell, over their refusal to back a second referendum.

In Hackney North and Stoke Newington, where Abbott has been MP for over 30 years, a poster on the side of OFOC’s van read: “Diane Abbott. Brexit is too big too ignore. Back yourself, back the young, back a People’s vote on the final Brexit deal.”

Last year, the Shadow Home Secretary appeared to voice her support for a second referendum in a letter to constituents, but later backtracked.

OFOC says Abbott has “barely spoken” about Brexit since.

Co-founder Will Dry said: “Young people are fed up that Labour are barely any better than the Tories on Brexit.

“We decided it was time to do something Labour couldn’t ignore – by telling senior frontbenchers that we want a People’s Vote on billboards and ad vans on their own turf.” 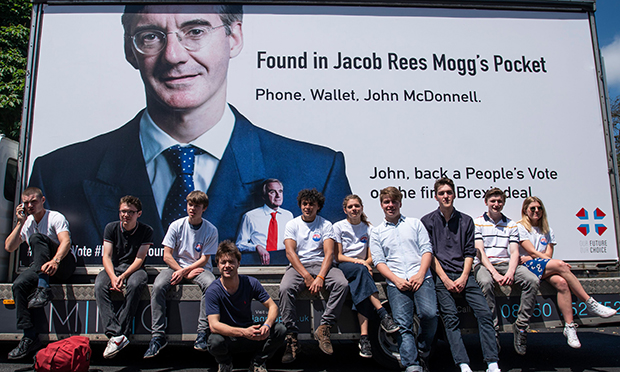 Posters depicting McDonnell and shadow defence secretary Nia Griffith as being in the pockets of hardline Brexiteers Jacob Rees-Mogg and Nigel Farage were also unveiled in the Labour MPs’ respective constituencies of Hayes and Llanelli.

OFOC is also asking who silenced Preet Gill over Brexit after the Birmingham MP was forced to delete a tweet in which she said “a people’s vote on the deal is an absolute must”.

The campaign has faced criticism on social media over its links to leading Remain groups. but says yesterday’s protest was fully crowdfunded.

The group’s website states: “OFOC is powered by: Best for Britain, Open Britain, The European Movement, and the Grassroots Coordinating Group”.

Dry added: “The small contributions of young people and Britain’s concerned public were the lifeblood of this campaign, which solely drew from our £15,000 crowdfunder.”

But prominent left-wing journalist Paul Mason described the stunt on Twitter as “a bunch of privileged, astroturfing Tories using millionaire money to troll the British people”.

A) OFOC is 100% crowdfunded.
B) Astroturf? I was on 20 followers in 2016. Hardly an establishment plot.
C) Since when is political campaigning “Trolling”?
D) Please watch this, and call me a Tory again… I dare you….pic.twitter.com/GgENbClfHp

The response from one OFOC member was “absolute nonsense”, while co-founder Femi Oluwole re-posted a video of himself singing, telling Mason: “Please watch this and call me a Tory again – I dare you.”

OFOC says it will roll out more billboards and ad vans in the constituencies of Labour politicians until the party “backs a people’s vote on Theresa May’s final deal”.

“Expect better from your Labour leaders. And expect more soon from OFOC.”

OFOC was founded by Femi Oluwole, Lara Spirit, Will Dry, and Calum Millbank-Murphy.

The group’s website says it now has “over a hundred leaders at universities up and down the country, with others mobilising young people in work, at school, or in training”.

For more information about Our Future, Our Choice, or to get involved, please visit ofoc.co.uk