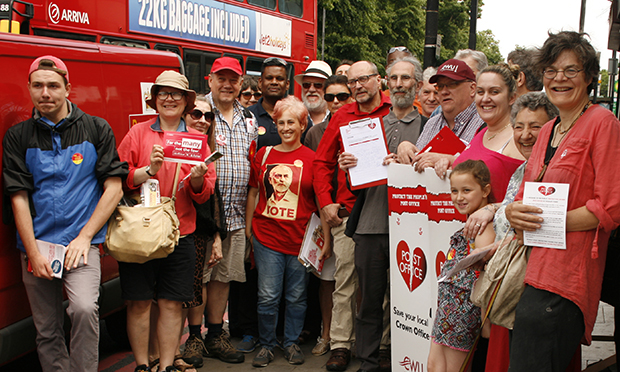 No control: residents failed to save the Finsbury Park post office from being franchised last year. Photograph: Hackney Citizen

A group of Finsbury Park residents has announced plans to create a Neighbourhood Forum – which they say will give the community a voice in planning policy in the “forgotten corner of three boroughs”.

Finsbury Park is part of Hackney, Islington and Haringey, and the group – currently known as Finsbury Park + Stroud Green (FPSG) – will later this year apply to all three councils for Neighbourhood Forum status.

If successful, FPSG will submit a second application to define the boundary of this neighbourhood.

The group has carried out a survey of more than a thousand residents and stakeholders, and based on the results is proposing the area covers Finsbury Park, including the park itself, and Stroud Green.

FPSG will then press ahead with the preparation of a Neighbourhood Plan, covering issues such as historic and natural environment, the location and scale of new developments, affordable housing, community facilities and transport.

Sally Billot, who has been working on the idea since its inception in 2015, said: “Despite a collaboration agreement signed by the three councils in 2012, Finsbury Park has often felt like the forgotten corner of three boroughs.”

She added: “The Neighbourhood Plan offers the opportunity for the community to guide the future of Finsbury Park in a comprehensive way, working across administrative boundaries.”

Any plan would be put to a local referendum, and would only come into effect if more than 50 per cent of respondents support it.

Billot said: “The most powerful aspect of Neighbourhood Plans is that they are prepared by the local community – bringing together passionate community champions in the process. But this requires community involvement.”

The group hopes its wish to become a Forum will be granted this year, and has already produced a draft constitution.

FPSG is on the look-out for new members from the local community, who will be able to elect people to the steering committee and vote on draft policies, as well as being kept informed about the Neighbourhood Plan.

Membership is completely free, and there is no obligation to attend meetings.

Last year, local residents tried but failed to save Finsbury Park post office from being franchised, despite overwhelming support for their cause and an intervention from MP Diane Abbott.

For more information about the plans, or to get involved, please visit finsburyparkstroudgreen.com