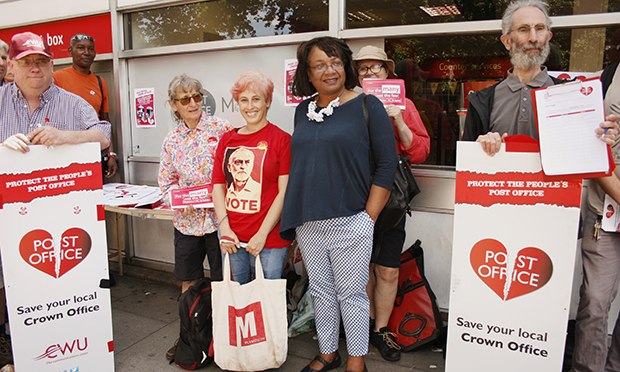 Plans to franchise Finsbury Park Post Office are to go ahead despite local opposition, the mail giant has confirmed.

Local MP Diane Abbott joined a protest outside the Crown branch at 290 Seven Sisters Road earlier this year, and many residents voiced their opposition to the move during a contentious six-week consultation period.

PO Ltd says it “carefully considered” the objections of local residents before making the decision to go ahead.

Businessman Rizwan Salahuddin is to run the new branch as part of a stationery shop, with PO Ltd confirming it will have “longer opening hours” and keep all current services except biometric enrolment.

Local campaigner Geraldine Timlin, whose petition calling for the move to be scrapped garnered over 1,300 signatures, said: “I am unsurprised by PO Ltd’s decision to bulldoze through their intentions. It was always a pretence on their part that they were ‘consulting’ local opinion.”

Timlin confirmed that a threat to boycott the new branch’s retail arm will be carried out. More than 500 people signed a pledge not to buy anything from the stationery shop.

She added: “We already have a stationers round the corner – Fish and Cook – which has been part of the community for years and will now be robbed of business.”

Diane Abbott, who refused to be drawn on whether or not she would support the boycott, told the Citizen: “I am disappointed to see that this proposal is going ahead despite the wealth of opposition against it. It appears the concerns of local people have simply been ignored.”

Timlin raised campaigners’ complaints about what she describes as a “shabby” consultation process with Citizens Advice.

Chief among them was PO Ltd’s decision to hold a drop-in session in the middle of the summer holidays, and in a location outside the neighbouring area that “even the people who went along could not find”.

A manager from Citizens Advice wrote back: “While the decision to recruit a franchise retailer is an operational matter, outside our control, we scrutinise every proposal to ensure that the access needs of disabled and older customers are met.

“In a recent phase of Crown Post Office relocations to WH Smith stores, Post Office Ltd decided not to proceed with the Dunraven Place, Bridgend proposal due to the specific access issues raised by local representatives and Citizens Advice during the consultation.”

Timlin said that, while PO Ltd “may claim it is acting within the letter of the law”, its behaviour is “certainly not in keeping with the spirit of the law”.

She added: “This goes much deeper than Finsbury Park. The Post Office is toeing the government line by cutting out public services and pushing more people into insecure employment. We’re sliding gently towards a future in which no-one will have the security they deserve.”

A Post Office spokesperson said: “During the consultation we received views raising a range of concerns including the change to a franchise operation and level of service.  We have carefully considered all the views provided before reaching a final decision.

“The majority of Post Office branches are operated on a franchise or agency basis and, in Finsbury Park, this will enable the branch to be sustainable into the future – obviously this is of key importance for the community and our customers.”

They added: “We are confident that our plans are the best way of meeting customer needs and safeguarding future service provision.”

The branch will be closed from 8-13 November for the handover to Salahuddin.

A further shutdown is planned for the New Year for refurbishment works – dates for which are yet to be confirmed.