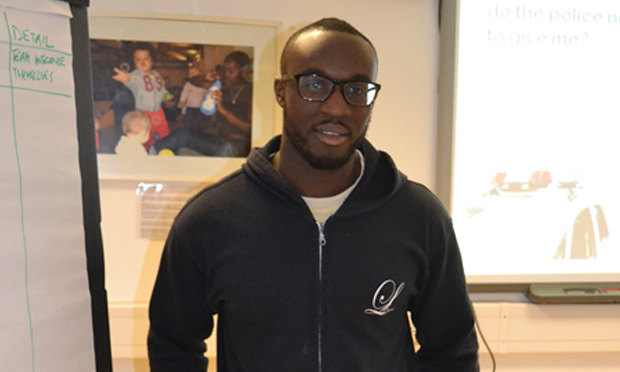 Young men on a police “gang matrix” slammed by Amnesty International should be offered apprenticeships to turn them away from a life of crime, according to a Hackney youth worker.

Adeoshun, who was interviewed by Amnesty for the report, told the Hackney Citizen a better approach would be to help young black men find properly-paid jobs.

“We’ve had the gang matrix for years”, he said. “Knife crime and gun crime is on the increase.

“Wouldn’t that money be better spent helping young people in the matrix?”

He continued: “Everything is about enforcement and not much about prevention.

“What I would propose is give these young people jobs, because everyone knows if you’re a young black man and you’ve got a conviction, the chances of getting a job are very small.

“Some of these guys have been caught selling drugs just to make money. We tell them to stop, but what are we offering them to stop? Nothing.

“If they’re making money on the street then offering them £7 an hour is just not going to cut the mustard.”

Adeoshun suggested good apprenticeships with real career prospects might be the answer.

“When you offer one of these guys that, they might start to think”, he said. “If they took that up, that’s one person off the streets.”

Last week, Amnesty International’s UK Director Kate Allen called on London Mayor Sadiq Khan, who oversees the Metropolitan police, to “dismantle the matrix unless he can bring it in line with international human rights standards”.

The Metropolitan Police responded by welcoming Amnesty’s report as a way to help improve “this challenging area of policing”, noting that Met officers were interviewed for the report.

But it also defended the gangs matrix, saying: “The gang violence matrix is an intelligence tool used to identify and risk assess gang members in every London borough.

“Its aim is to reduce gang-related violence and prevent young lives being lost.”