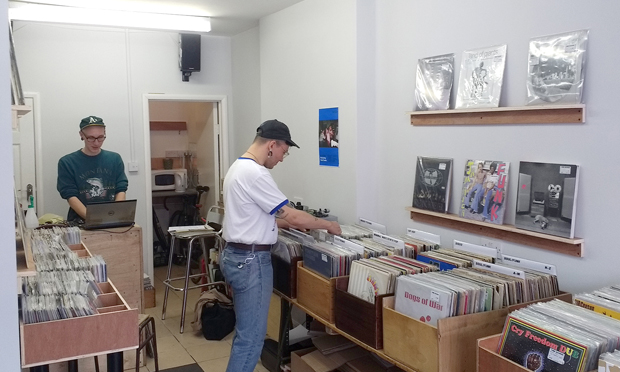 The so-called vinyl revival and re-emergence of record shops has been well documented in recent years, as music buffs shun ethereal digital formats in favour of something they can hold, smell, damage or lose.

Latest figures from the organisers of Record Store Day, which this year was on April 21, show there are now over 400 independent record shops operating in the UK and that more than £87m was spent on vinyl in 2017 – a 33.7% year-on-year increase.

Hackney is well-served when it comes to places to buy music, and there has recently been an influx of new independent ventures looking to feed the growing appetite for vinyl and the community appeal of a bricks and mortar store.

One such newcomer is Matters of Vinyl Importance (MOVI) which opened its doors on Hoxton Street towards the end of last year, and is run by two music industry veterans Alan Pell and Ben Kirby.

Pell told the Citizen how he views the shop as less a point of sale and rather more of a “community centre” where people can socialise, make friends and discover new music.

He pointed out that MOVI arranges its music alphabetically instead of by genre, saying: “You can find Miles Davis, Depeche Mode and Bob Dylan all in the same rack!”

It also has a café and exhibition gallery, as well as hosting events like last month’s discussion with Pamela Des Barres about her classic rock’n’roll groupie memoir I’m With the Band, with future plans to “showcase local artists, poets and musicians”. 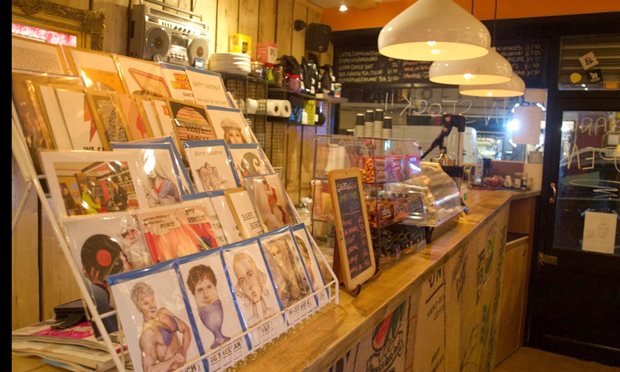 Matters of Vinyl Importance is a social space as much as a record shop. Photograph: MOVI

Another store new to the scene is Tome Records, which has found a home in Hackney after starting out south of the river at Bermondsey’s DIY Space for London – a social co-op venue with an emphasis on community participation.

Run by friends Matthew Estall and Kevin Hendrick, the stripped back shop in Hackney Central – still only a few weeks old – champions the Do-It-Yourself ethos from which it grew, giving prominence to bands and artists from DIY culture as well as branching out into a wider selection of music.

Asked why he thought the demand for local vinyl stores had been rallying in recent years, Estall said there’s an “allure to records that’s never gone away”.

He added: “With the internet you’ve got to know what you want already but in a record shop you can flick through records and get recommendations. It’s a social thing – people can come in and have a chat about music.”

Tome Records is open seven days a week buying and selling vinyl of all genres and Estall was excited to be a new addition to Hackney’s growing community of music traders.

His view was of a collaborative network of independent shops each serving the particular tastes of music lovers in Hackney and beyond.

“The more record shops in Hackney the merrier”, he commented. “We’re working together, not competing.”

An example of this idea in practice is Crypt of the Wizard – another recent arrival to Hackney’s record store circuit, specialising in heavy metal. The black-clad Hackney Road shop, which also runs its own record label, sells vinyl and merch from forebodingly-named bands like Knight Terror and Graveyard, the latter of which recently held an album launch event in-store.

Its website makes the speciality clear: “If the sound of steel and thunder makes your heart sing, if you were born too late clad in denim and leather, if you’re a child of the night living in a Heavy Metal daze then Crypt of the Wizard Records may be the place for you”.

Final mention goes to Stranger Than Paradise Records, which has just set up shop in the shiny new Mare Street Market development. It held an in-store launch party in April with David Holmes working the turntables and has also welcomed Michael Kiwanuka and snooker legend-cum-DJ Steve Davis as guests.

Wherever your musical allegiances lie, Hackney is bursting with options to seek out vinyl and talk to like-minded enthusiasts.

New record shops are popping up all over the borough and as the resurgence of vinyl gathers pace they will continue be a haven and a community for dedicated collectors.