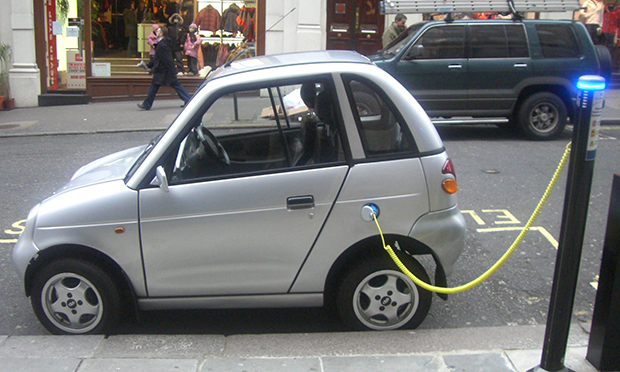 Hackney Council has revealed plans to install around 180 electric vehicle charging points across the borough over the next year.

Although the exact number and locations of the chargers are yet to be confirmed, the Town Hall provided a detailed target for 2018/19.

Twenty-three lamp columns, eight bollards and three rapid charge points are to be fitted on three of the borough’s busy market roads as part of Transport for London’s Neighbourhoods of the Future (NotF) scheme.

TfL, which is contributing £270,000 towards the project, says chargers on “electrified market streets” will be built into existing features, “remaining sensitive to the look and feel of the area”.

A further sixty lamp columns are to be installed in the City Fringe for the NotF scheme, along with five free standing charge bays.

Between 55 and 60 lamp columns are earmarked for residential roads in Hackney, as well as 15 points for car-share clubs.

There are currently 22 places to charge an electric vehicle in Hackney at regular speed, which can take a few hours.

There are also four rapid points, which can fully charge a car in under an hour. Hackney was the first borough in the capital to have these installed.

The council says on its website that its aspiration is for “all households to be no further than 500 metres from the nearest fast charging point by 2025”.

In response to a recent survey for London Councils, which represents local authorities across the capital, Hackney criticised TfL’s lack of ambition on fast chargers.

The Town Hall said it was “disappointing” that only 12 rapids are set to be introduced across all boroughs in 2018/19, adding: “Hackney Council is investigating three new rapids on borough roads and four on TfL roads, however we also already have four on-street rapids.

“So we welcome the request for all local authorities to increase efforts to identify potential suitable locations on borough roads.”

Hackney’s transport chief Cllr Feryal Demirci said: “Improving air quality is a priority for Hackney and we are working hard to make it as easy as possible for residents, businesses and visitors to make greener choices.

“Through bringing electrical charging points to our street markets and by adapting lamp posts, residents and businesses alike will have much easier access to low emission solutions to help improve air quality in the borough and reduce their carbon footprint.”

The council does not have precise figures for the number of electric vehicles in use in the borough, but said it has so far issued 210 parking permits for them.

Alex Williams, TfL’s Director of City Planning, said: “If we are to bring London’s air quality within legal limits it will require us, local authorities and the government to work closely together.

“Neighbourhoods of the Future are a fantastic example of how partnerships working can lead to innovative projects that make a real difference to Londoners’ lives.”

Hackney Council has also been awarded £150,000 to help create an alternative charging network to Source London, which now operates over 850 public points across the capital.

Source London was set up by former London Mayor Boris Johnson before being sold off to a private company in 2014.

It has faced criticism from drivers in the past for not fixing faulty chargers quickly enough.

To find out more about driving an electric vehicle in Hackney, including the cost benefits and charge locations, please visit the council’s website here