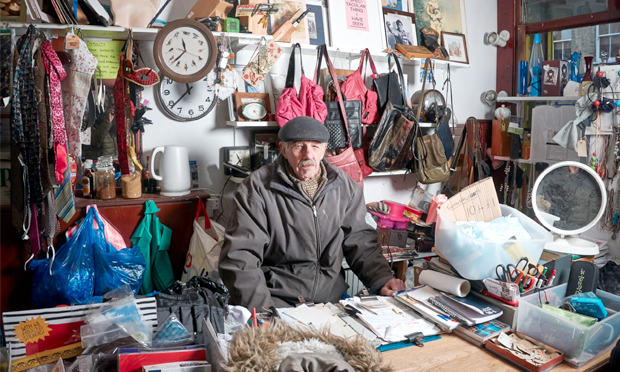 Junk Culture: a portrait of Leo, in his Hackney shop, courtesy of one of Future Hackney’s young photographers. Photograph: Future Hackney

In their short, Lottery-funded history, Future Hackney have already launched a scheme to get young locals filming, allowing them to capture the borough that’s changing all around them. With their new photography project, Future Hackney (working with non-profit Hackney Quest) have opened up a new, more reflective way for Hackney youth to make their voices heard amid gentrification and housing chaos – in this case, furnishing them with the skills of a trained snapper.

Well Street Stories presents a mixture of studio and street photographs, of an eclectic mix of those local to the artery between South and Central Hackney, who were also interviewed informally about imposed changes to their ends. “Many people…were concerned that some residents were being left out of decisions. Some spoke of the poorer communities not being able to afford the expensive bars and shops. Others were worried that people from Hackney could not afford to live here anymore,” recounted Donna Travis, project lead. Their voices will be ringing out indefinitely at event space/cafe NuDawn – head there to have a butcher’s at prints from your own backyard. Running indefinitely from 26 April

While moving from their old digs near Broadway Market to their new Lauriston Road location, Transition Gallery has sequelised. But the ‘Two’ in Transition Two has a deeper meaning than any straight-to-VHS cinematic rip-off. From here on out, each of their exhibitions “will feature two artists in dialogue, collaboration or opposition.” The duelling artists in this springtime show are Mancunian Alex Pearl and Cambridge grad Katherine Tulloh. The gallery describes sciomancy, the titular word derived from Ancient Greek, as “divination by consulting the shades of the dead”. 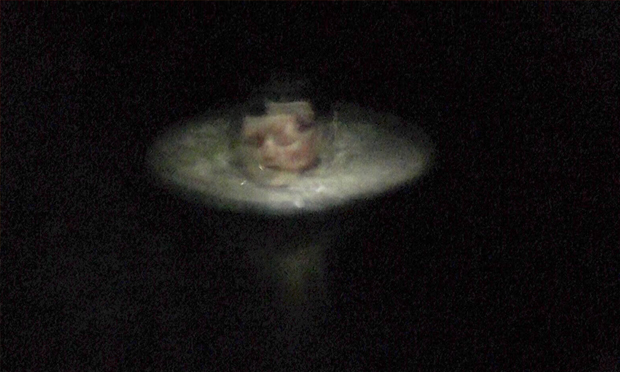 Of the two artists involved in this exhibition, Pearl perhaps works closer to this definition – he uses a 19th century quasi-holographic illusion, known as Pepper’s ghost, to conjure up truly spectral images, as well as transworldly film and sculpture. Tulloh deals with a different kind of spirit. Her paintings of empty bottles found around Hackney brought to mind “potion vials, drunk at midnight on a street corner, dropped after some transformative ritual has taken place.” Her lush, deep style perfectly captures this witchy potion notion. From 27 April until 20 May

When one thinks of Northern Irish street art, one’s thoughts are immediately drawn to the many murals, living cornerstones of over a century of history. Belfast-based Leo Boyd’s take on street art (and street art-influenced screenprints) instead looks to a similarly troubled future, not for the Six Counties but the whole world. This collection positions itself as art from a computer simulation we all live inside, the ‘Simulated World’, and explores “our deep-seated and often confused ideas of what it is to be real”.

Heads are transmuted into screens, which are perhaps the most important currency in Boyd’s work – as they are in real-life of course. Elements from tech and video games are depicted with a Renaissance-religious symbolic import (fittingly, Boyd studied Fine Art in Context) and detailed figures are rendered blank by pixelation and the encroaching electronics. His bold prints, almost Soviet in colour scheme, are printed on a variety of materials – wood, board, canvas. They’ll be available to view (and buy) at Atom, the gallery on Green Lanes which has printing facilities of its own. From 5 May until 26 May 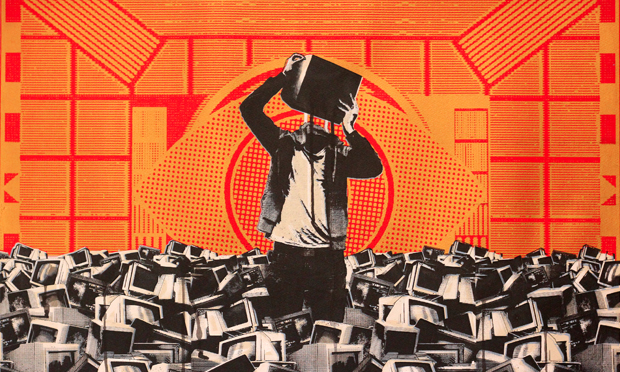 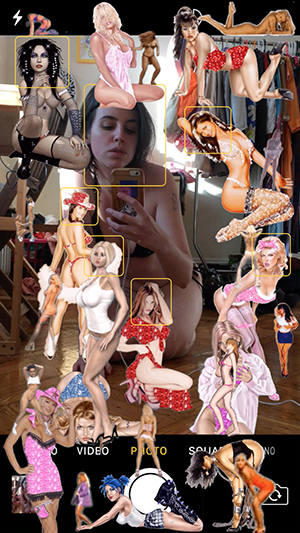 Digital Get-Down: a typically revealing collage, made to promote Molly Soda’s Me and My Gurls. Image courtesy of Annka Kultys Gallery/Molly Soda

Molly Soda has been a “name” – perhaps the name – in the recent history of internet art and culture, bringing the private female cybersphere to artistic life from her bedroom in Brooklyn. Her pieces range from simple screenshots of her Mac desktop (the generic nature of this sight is often rendered humourous, provocative or relatable depending on the content of the layers of open windows and tabs) to aluminium and acrylic prints. Building her following on platforms like Tumblr and YouTube, as well as digital obscurities like expired image-sharing site dump.fm, she’s since inspired devotional songs, crowdfunders for her art and the usual mixture of reverence and pathetic hatred received by many women artists online.

Me and My Gurls is almost a retrospective of all the themes and mediums she has utilised over the last decade. There’s those horrible YouTube comments, looking all the more ludicrous for being made into a physical archive, there’s screens aplenty (her video work further mixes up ideas of social media performativity and artistic practice, for example INBOX FULL lets us see Soda clearing her Tumblr inbox in real time) – we’re even promised printed balloons. Soda is as keen as ever to share her world, and hang a lantern on the unique disconnections felt at the centre of online obsession. From 10 May until 16 June

Yes pedants, Paul Maheke’s first solo UK exhibition has been on since 13 April – but a changing of the guard is planned for 2 May. As befitting of an exhibition intensely focused on the dualities of inclusion and erasure – where the gallery space itself is regularly morphed and delineated by tape, curtains and other restructuring efforts – a rotating cast of performers take turns to perform “a series of daily choreographies”, for 45 minutes from 3pm every day the exhibition is running. (Note: some of these performances contain nudity.) A place you only go through, performed by Carrie Topley, is the one in situ for the majority of May, followed by Titilayo Adebayo and Heather Agyepong’s Entanglements (the assembly) from 23 May to the end of the exhibition.

The London-based Frenchman is more than a director of these art and pop culture-sampling performances – his cosmic mural on the wall signifying the worlds of possibility within his collaborative practice. He also worked with Sophie Mallett on the omnipresent sound installation, and through the accompanying video he is present too, dancing in a way the exhibition literature calls “persistent, but not always fully visible.” Until 10 June