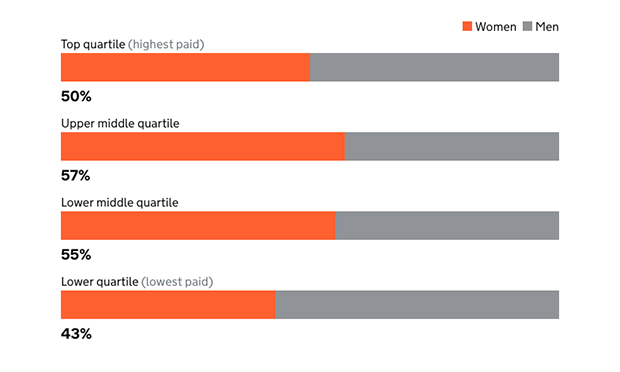 The proportion of men and women in each pay quartile at Hackney Council. Image: gov.uk

Women are paid more than men at Hackney Council but fewer receive a bonus, according to a recent Town Hall report.

Council pay analysis for 2017 shows the median hourly rate for females was 8 per cent higher than for males.

The Town Hall says this is because it only runs a single bonus scheme in its male-dominated housing department, but vowed to look into the “significant difference” over the coming year.

It added that it is “confident” that men and women are paid the same for equivalent roles.

“This is because there are significantly more men than women in the lower quartile, and there are more women than men in the two middle quartiles.

“There are more male dominated jobs in the lower quartile such as in posts titled operative / cleaner, grounds maintenance staff and environmental operative.

On bonuses, the report reads: “The council operates an equality proofed pay and grading structure, which is a points-based system used to allocate jobs to specific grades.

“We’re confident that men and women are paid the same for equivalent jobs.

“The data shows a significant difference in the percentage of women and men who are paid a bonus, and we’ll be looking into this further over the coming year.

“The data on bonus gender pay gap is not reliable due to the very small numbers of women in receipt of a bonus.”

The council found that women are paid similarly to men across Hackney as a whole.

Under new legislation that came into force in April, any UK employer with more than 250 staff must publish its gender pay gap.