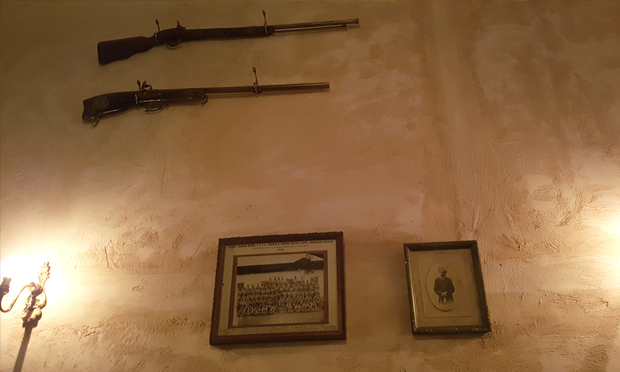 Coming in through the snow into Gul & Sepoy’s sandy, Tatooine-esque interior on Commercial Road, I’m met with a rush of incense, Indian spices and, therefore, excitement.

The restaurant, launched by the team behind ‘home-style’ Indian kitchen Gunpowder in Spitalfields, is more froufrou than its predecessor, and is loosely structured around a two-tiered system inspired by both regal North Indian cooking, and food more commonly enjoyed by foot soldiers. 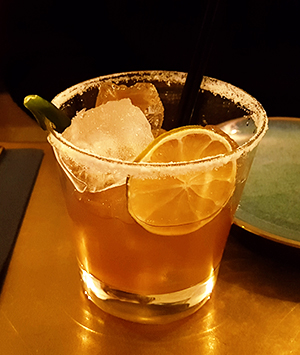 The front-of-house explains that they haven’t gone for “the popular rice dishes, or a lot of naan”, preferring what they call an “English approach” where small plates and sharing are the key pillars. (I hold my tongue, but to me, the “English approach” to Indian cuisine involves at least a couple of cans of Stella.)

We order five dishes – the waiter recommends four to five, six at a push – and a pair of drinks. My dining partner’s chilli and cardamom margarita has a strong, rich sweetness, and my beer, Forest Road Brewery’s IPA, Work, has found its spiritual home here: paired with Indian food, its bitter quench makes perfect sense.

Said food is served as and when it’s ready, and first to turn up is the potted pig head with blood masala onions. It’s ‘potted’ because it’s literally potted, arriving as it does in a tiny plant pot with greenery sticking out the top. It’s a neat gimmick, and it makes it easy to divvy up the tenderly slow-cooked pork and onion mix. This is the closest thing we sampled to a ‘traditional’ meat curry – a top-notch one, with a fatty earthiness coupled with mellow masala and tomato flavours. 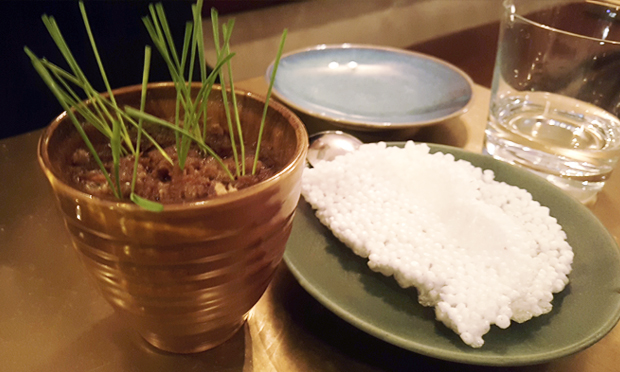 While I chow down on my ceramic curry, my partner’s dal arrives, topped with pickled pineapple. If the pig head is comfortingly familiar to omnivores, the same is true for veggies and this dal – the slow build-up of spice through the lentils and rice is classic coastal Indian, with the pineapple singing through on top, enlivening but not masking a great dish.

Turn your eye to the saucy image below. This is the yam and paneer kofta chaat, coated in three delicious sauces – chilli, tamarind and yoghurt – that mix, like an Indian take on Mary Rose, into something special. The pomegranate adds perhaps a touch too much sweetness, but perhaps that’s hypocritical, since the kofta sits in a bed of toasty desiccated coconut that begs to be shovelled into one’s gob. 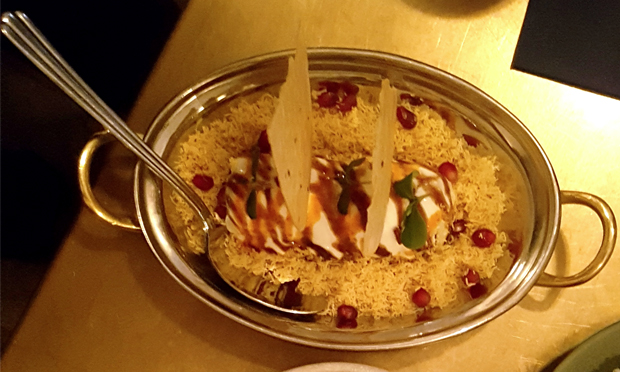 Saucy: the yam and paneer kofta chaat at Gul & Sepoy

Our final two dishes are more of a mixed bag than the preceding three. The whole soft shell crab is overwhelmed a bit by the amount of batter, and comes with an aubergine and tomato pachadi (an Indian term that refers to food that has basically been pounded into mush) that doesn’t really cut through. Nonetheless, expensive crab is expensive crab (the dish comes in at £10), so there’s merit to be found.

The burnt achari cauliflower fares better, in fact it’s superb taken alone, its tandoori-style deep red colouring giving a visual hint to its sumptuous flavours. There’s not enough of it for your six quid though, as it comes with some fairly unnecessary roasted new potatoes.

Overall, some might balk at the direction Gul & Sepoy have taken here – those who value consistency and their wallet won’t have to look far in Whitechapel for an authentic alternative dinner option.

However, the high points of their experimentalism are indeed stratospheric, and judging by the appreciative noises at the table next to us, if you sub the whole sea bream in place of the crab, you’ll be laughing. Just don’t ask for a side of pilau.