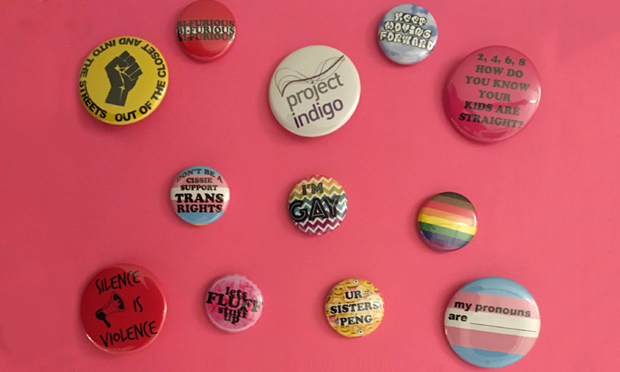 Around this time last year, Mayor Glanville and the council, flanked by artists and campaigners from the community, launched Hackney Pride 365, aiming not just to provide support and events for the present LGBTQI+ individuals in the borough, but also to “immortalise” the history of the struggle for recognition and respect on one of the last frontiers of civil rights.

These records and testimonies from such vital historical moments were not meant to be kept on the shelf, and so the fruits of this information drive will appear as part of pair of new Hackney Museum displays, just in time for February, LGBT History Month, and, of course, Valentine’s Day’s celebration of love in all its forms.

Out and About and From Bedroom to Battleground, the two exhibits, are available to view in the Hackney Museum on Reading Lane from Thursday 1 February.

The former was born in collaborative sessions between artist – and purveyor of fine wallpaper – Angela Groundwater and the titular Out and About group.

Normally a free life-coaching service for older LGBTQI+ people, the group turned their hand to Groundwater’s game, and the resulting wallpaper design weaves biographical illustrations together to tell the stories of five group members, all old enough to know a time when homosexuality was a criminal offence. More details and images are still firmly under wraps ahead of the unveiling…

Where Out and About looks back, From Bedroom to Battleground lets the youth handle the visuals. 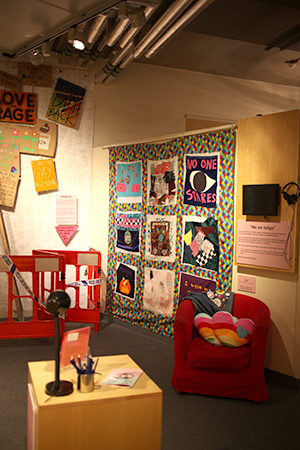 An installation shot of From Bedroom to Battleground. Photograph: Hackney Council

Funded by street artist Stik’s auction of his Hackney Pride banner, this exhibit reflects the views and creativity held by the younger LGBTQI+ generation, such as 15-year-old Armani from Homerton, who said “I enjoyed being part of the workshops to make the exhibition. It was good to be creative when I am feeling stressed.”

Working under the tutelage of another artist, the fearless Liv Wynter (her appearance at rap battle series Don’t Flop broke boundaries in that world), Project Indigo were encouraged to tell their stories – for their own well-being, but also to help those even younger or still otherwise struggling.

Since Pride 365, the Museum has collected 13 oral histories, trained 10 volunteers in collecting historical material, and has had physical donations ranging from campaigning materials to event posters from the Bloo Lips alt-drag troupe (whose Lavinia Co-Op lit up the Hackney Empire stage late last year in Jonny Woo’s Unroyal Variety show).

Mayor of Hackney Philip Glanville, himself one half of the first same-sex marriage ever in the borough (signed off one minute after the change in law), said: “I’m pleased together we’ve started to capture and celebrate the experiences of Hackney’s LGBTQI+ residents, especially giving voice to older residents who fought so hard for the freedoms we now enjoy.

“This not only helps to inform the younger generation, but celebrates role models and causes they can identify with and build upon, ensuring Hackney’s values of inclusivity are shared with future generations.

This exhibition is also a fantastic chance to explore the challenges and opportunities of today’s LGBTQI+ community and I would recommend all residents come and visit it.”

Both Out and About and From Bedroom to Battleground open to the public following a launch party on 1 February, which’ll host speeches from the Mayor and the leaders of Project Indigo and Out and About, followed by performances by Liv Wynter and guests

Hackney Museum are still on the lookout for objects to further plug the gap in their LGBTQI+ collection. Visit www.hackney.gov.uk/museum-projects for more information, email hmuseum@hackney.gov.uk or call 020 8356 3500