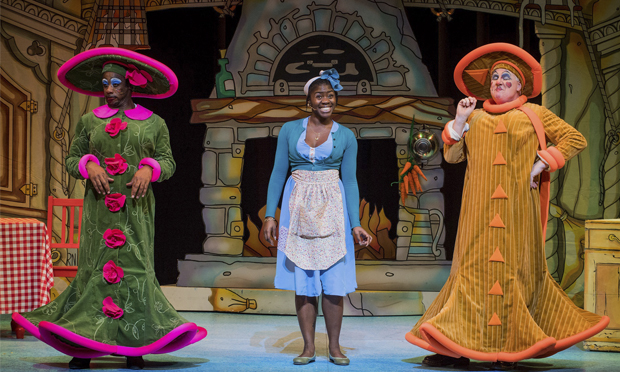 Kat B (left) and Aisha Jawando (middle) in Cinderella, which is at Hackney Empire until 31 December
Photograph: Robert Workman

Aisha Jawando and Kat B might be in civvies when I catch up with them backstage at the Hackney Empire (where they’ll play Cinderella and an Ugly Sister respectively until 31 December), but Christmas magic sparkles in their eyes when discussing their take on Cinderella. “We’re getting paid to have fun on stage!” enthuses Kat.

He has a stab at what makes Hackney’s Christmas pantomime different from standard fare: “We don’t need TV celebs to put on a show… We’re doing it the other way round, we’ll do great stuff here, and then make our way to I’m A Celebrity Get Me Out Of Here!”

“I like the different races,” adds Jawando, ”we’re breaking stereotypes and boundaries. Hackney’s well known for that.” 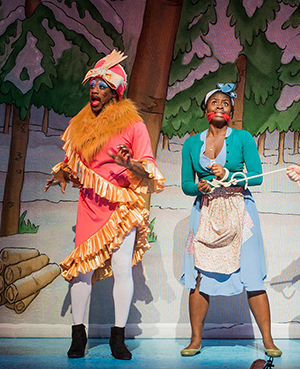 Her Cinders also departs from the traditional, put-upon, voiceless character. “Even in the writing itself, there’s a lot of bite from Cinderella,” explains Jawando. “She doesn’t just go ‘ah poor me’, she puts up a fight first.”

Kat thinks, if anything, the Empire way of doing things should be the norm: “It’s really traditional in that we’re telling a story, whereas everyone else with lots and lots of money is doing a typecast of what their story should be.”

This is Kat’s 13th panto, back to back. He credits his relationship with fellow Ugly Sister Tony Whittle as one of the keys to his staying power.

“We text each other throughout the year – just random madness. So when they stick us together it’s like, ‘come oooon!’ We’ve always gotten up to mischief, even before being put together as a double-act.”

Kat’s Sister is the more sympathetic of the two – “she wants to be like [Whittle’s] big sister… there’s a message there: if you want to be a bully, there’s not much point in doing that.” But his main role is still to bring the laughs. Plus: “I get to dress up like a woman and no one questions me – for a few hours.”

This is Jawando’s first panto – to date, her acting roles have brought her characteristic spark and shine to West End shows like Motown: The Musical and The Lion King.

So what’s it like treading the boards at Christmas? “I had no idea what to expect, from the acting point of view… I feel like it is different, but similar to musical theatre. [Similar in that] you’re believing you are that character, so that the audience believe that you’re that character and get into the story with you.

“But there’s the whole thing of breaking the fourth wall with the audience – I don’t really have to do that in musical theatre. To actually break away and have a conversation with [the audience] and to use their emotions and their responses. It almost feels like you’re singling one person out – they’re all on this journey together.”

Kat B concurs: “They believe because we believe.”

He and Jawando agree that the audience interactions hold nothing to fear. “Well, as an Ugly Sister, if you’re not booing me then I’m not doing my job!” says Kat. 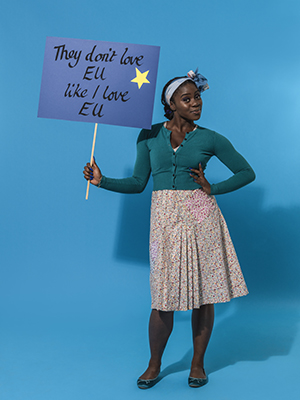 “But it’s that light and shade of doing that – if you’re completely ‘dark, dark, dark” then you will scare the crap out of the children, beyond the point of bringing them back.” On the adult side, if there’s anyone misbehaving, then the Sisters and Buttons have scope to go off script briefly while security swiftly act.

“Panto is a discipline,” Kat asserts, “where each person – no matter if they’re 50 or five – they all become the same age. They’re all children in your hands.”

Jawando agrees; she can tell by the “big grins, eyes wide-open… It’s like ‘ah, okay, what world are we in?!’… Everyone’s on the same page when we turn it.”

She shares sadness that she isn’t close enough to the audience to hear children’s awed gasps (recounted by Kat) as she emerges, transformed into a princess, a moment she counts as her favourite. It’s these reactions that keep them both going.

But Kat is right in calling panto a discipline – the duo, along with the rest of the company, will only get one day off, on Christmas Day.

“When you can sleep, you sleep,” says Kat B. “It’s like going to the gym. If they made panto in movie form, I think a lot of people would be finished. They get eight or nine months to train for a movie, we get three weeks.”

With that in mind, I leave them to the rest of the night’s preparations, and commiserate that it must be tough performing the same thing each night. Both actors instantly correct me. “It’s never the same. It’s never treated as ‘oh, we’ve done this already’, because once you do that, then you have to give up.”

← Pumpkins are for life, not just for Halloween…Be-Bop-A-Lula, Stoke Newington, restaurant review: Nashville to N16 →