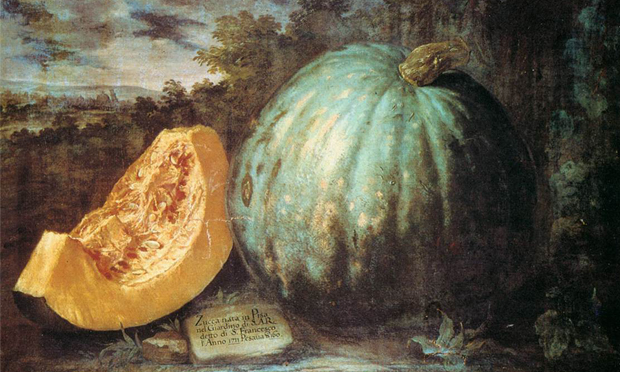 As the dust settles on the by now deliquescent corpses of the Halloween pumpkins, Hackney citizens can begin to enjoy the versatile qualities of this extraordinary plant.

The cucurbit family is big and boisterous, beneficent in its nutritional qualities, but lethal to popes, prophets, and the overindulgent. It includes cucumbers, and a huge variety of melons, squashes or pumpkins, and marrows and zucchini.

Besides being refreshing and cooling, the cucumber plant has a profusion of decorative leaves, with a propensity to climb upwards and spread itself like a shade plant, as we read in the Bible: Jehovah and Jonah deserved each other; two vindictive old men with world-dominating agendas.

The prophet Jonah, perhaps slightly unhinged after three days in the belly of a whale, took it upon himself to obey God’s call to command the citizens of Nineveh to forsake ‘… their evil works, that is to say, oppression, and fornication, and lying, and theft, and fraud, and blasphemy…’ His eloquence inspired a wave of hysterical confession and remorse, as the people of Nineveh put on a great show of public repentance.

God took pity on the grumpy old prophet and commanded a fast-growing cucumber plant to give him shade, like the shelters peasants made while working in the fields, then unkindly caused it to wither and die the next morning, which upset Jonah and provoked Jehovah’s rebuke that, if he could care so much about a plant he had neither grown nor cherished, could he not find some compassion for the shortcomings of his fellow citizens?

It’s been a hard day’s night…

In Rome, one sultry night in July 1471, after a hard day persecuting dissidents, Pope Paul II, robust and in the prime of life, enjoyed an ample dinner and retired to the Vatican gardens where he devoured two large ripe melons and expired of apoplexy. 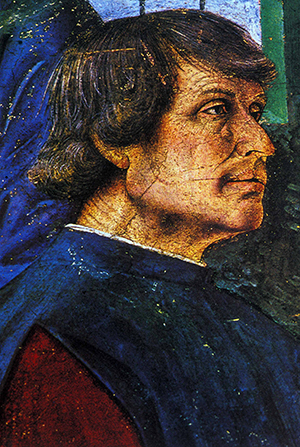 It was while recuperating in the summer residence of Cardinal Francesco Gonzaga, in the village of Marino in the Castelli Romani, that Platina met Martino de Rossi, a brilliant cook, working for Ludovico Trevisan, Patriarch of Aquileia, who had a villa nearby.

As often happens when gifted cook and dedicated foodie get together, ‘Let’s do a book!’ they chortled over a glass or two of the vino dei castelli. And so they did. A sort of sonata for four hands as Bruno Laurioux, their historian, put it.

Martino provided the recipes and Platina, the intellectual, wrote a longer text, a sort of health handbook, with notes on ingredients and their medicinal properties, and some anecdotal material, alongside the recipes.

De honesta voluptate et valitudine (On decent pleasure and good health) was the title of Platina’s published version, which eventually became the first best-selling cookery book. Meanwhile Martino’s recipes circulated in manuscript, one of which I had a lot of fun translating.

It is a strange quirk of history that it took a couple of ripe melons to bring Martino and Platina together in the right place, at the right time, and so give us this clear view of the New Cookery of the Italian Renaissance. The nouvelle cuisine was a refreshing change from the complex highly spiced food of the rich in Medieval Europe.

Clarity and simplicity were what Renaissance art was all about, and so was the food. Martino has a recipe, Chicken with verjuice, where chicken joints are cooked in the fat rendered off some diced pancetta.* The fried chicken is finished off with verjuice (a slightly fermented condiment made from unripe grapes), or you could use deseeded grapes, or lemon or bitter orange juice, seasoned with a little pepper and saffron, and served with a handful of chopped mint and parsley.

* Pancetta is not gastro-snobbery, it is a cut of dry-cured hard back fat or bacon, not the depressing moist stuff from industrially raised pigs, where the poor animals are bloated with growth hormones and excess water, then their meat padded out likewise, and the frying pan floods with the unwanted liquid you have paid good money for.

The cult of monster vegetables is not the prerogative of British gardeners, with this bizarre preference for size over flavour.

The Grand Duke of Tuscany, Cosimo III de’ Medici was a manic collector of freak giants, and he had them immortalised by the painter Bartolomeo Bimbi. This huge pumpkin (see image at the top), weighing in at 177 lbs, was grown in a monastery garden in Pisa in 1711 (you can just make out the leaning tower in the background) and dispatched to Florence one sultry autumn day, a distance of over 60 miles, deteriorating sadly on the way.

The news got around, and a cheering crowd escorted the squash in a wheelbarrow to the painter’s studio who set to work as the light was fading to immortalise the great beast. He cut a big slice from the back, so the golden flesh glows brightly, lighting up the encircling gloom, and distracting us from the already mottled and blotchy outer skin.

Pumpkins of various kinds are on sale all over Hackney, often at a discount now the frenzy has died down. They can be cooked in so many different ways that are more interesting than the cloying pumpkin pie.

Baked on their own, pumpkins can sometimes be a disappointment, but they add texture, flavour and colour to stews and soups. My favourite is the Hokkaido variety, a very hard dark green outer skin with white stripes, and a deep golden orange inside. 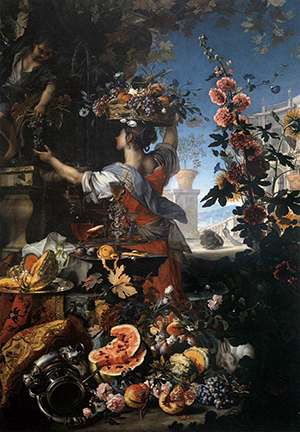 The big problem is cutting the wretched thing up – solved for me by an anecdote about a 17th century artist, whose still life paintings display watermelons with their bright red flesh and black seeds, cut or hacked into picturesque craggy lumps. (See the image on the right.)

To get the desired visual effect, he had to dash them to the ground with great force from a considerable height. It works. But don’t do this indoors or you risk killing the cat or maiming a passing child.

Fling the obdurate gourd to the ground outside on the pavement, then give the resulting chunks a good wash and add to soups or stews. You don’t have to peel it, the dark skin just cooks away.

The flavour is good on its own, and with the addition of some coconut milk, Thai fish sauce, garlic, ginger, a little chilli, served with a slug of Korean sesame oil, makes a nice vegetarian soup.

Or you can add chunks of the pumpkin to meat or chicken stews for the last ten to twenty minutes, then crush them with a fork or potato basher to thicken and add an extra burst of flavour to the dish.

← Abuse and neglect reports double in Hackney, rising at twice national rate‘They believe because we believe’: an interview with the stars of the Empire’s panto Cinderella →