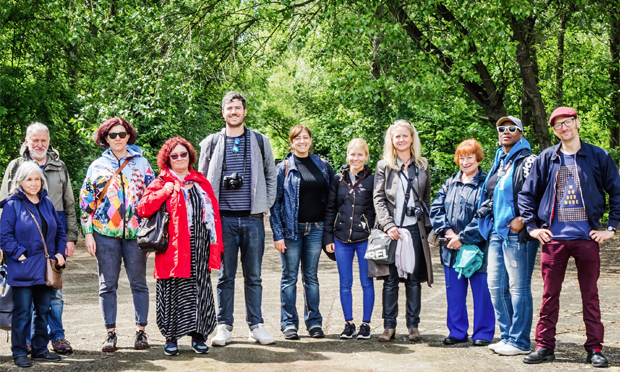 “I think anything that brings people together to connect with each other and provokes questions and debate is a good thing”: Simon Cole (far right) with a hardy band of tourists. Photograph: Frank Da Silva

Please tell us more about yourself and the history of how Hackney Tours came to pass.

In 2009 I was getting bored with London and was all set to move to East Berlin. Previously I’d been a tour guide in San Francisco and a scuba guide on the Great Barrier Reef and at the time I was taking school parties all over Europe and getting itchy feet again. Then, after a summer of festivals, ending with Burning Man in Nevada, I ended up discovering an amazing creative warehouse community in Hackney and my life totally changed. I’d only come to Hackney for a week but I never left. I was hanging out with artists and people who see the world differently and they helped me grow creatively.

I love my job touring Europe but I soon realised that right on my doorstep is this unique mix of a culture of artistic self-expression (eg street art) and socially progressive initiatives wired into a rich vein of radical history. I realised Hackney is not your average borough. I started doing some walks talking about Mary Wollstonecraft the ‘Founder of Modern Feminism’ and examining what was happening on the ground in Hackney Wick during Olympics build-up: it wasn’t being seen in the mainstream media but was important if you lived there. With a massive electric fence, missiles and soldiers, it became my very own Checkpoint Charlie. Next thing I was doing tours for local residents for the council and appearing at Stokey Lit Fest.

How did the Olympics impact and change the work you do, particularly around Hackney Wick and the wider ‘legacy’ area?

The Olympics were a huge event and the effects are hugely complex with long timelines. I always say Hackney Wick is the most interesting place in London because you’ve got the tensions of gentrification playing out there, writ large. It’s an academic’s dream and I’ve been involved locally as well as attending lots of those academic events. It’s because of the Olympics that German broadsheets and Russian TV wanted to hear me talk about the local situation that the British media wasn’t interested in, like the missiles in Bow or the road closures and building works that meant it was not a pleasant place to be for residents.

The land value changes mean that the artist colony that did so much to create the special Hackney Wick vibe is being squeezed out, after adding phenomenal amounts to the bottom lines of landlords and developers. It’s the same process that also affects less visible and less vocal groups that are quietly moved on as rents spiral – their story never usually make the papers. 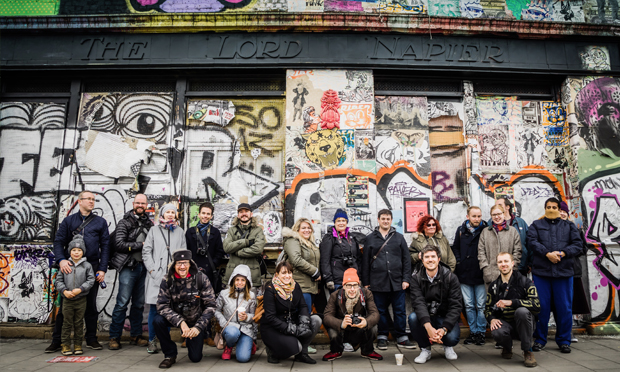 Simon and another tour group – this time on a photowalk in Hackney Wick. Photograph: Frank Da Silva

We’re in the midst of a heatwave as we speak – what’s the best weather, and other conditions, for tours of Hackney?

Do you have any favourite local characters that you encounter out on your tours?

I’m endlessly fascinated by people and Hackney is absolutely stuffed full of characters. They are each a walking play and they’re absolutely what make the place. We’ve got a deep psychogeographical layering of pioneers, visionaries and what some would call ‘eccentrics’. To paraphrase Leonard Cohen, they let in the light.

There are enthusiastic activists like the founders of the radical art and education movements Antiuniversity and Arts Emergency, inspiring artists, outlaw boaters in unusual pubs and Eton Manor ex-pupils who remember Oswald Moseley being chased out of Dalston. I’m professionally nosey so I chat with anyone and everyone. It makes me feel I’m really part of Hackney.

In your opinion, what has been the most welcome change you’ve seen in the borough over the last couple of decades, and the least welcome?

I’ve only been here eight years but still, the changes I’ve seen and their effects have been complex; our reactions to change are always ambivalent. I love the buzz of new things too but the crazy property market is slowly strangling London and killing creativity and diversity. Landlordism is pushing out not just people but small independent businesses as well. From the campaigners of Save Hackney Wick to the East End Trades Guild members, everyone is being squeezed by big money. The end result will be a bland monoculture.

From the priced-out arts worker to the short-lease bar owner, all sorts are now feeling a precarity that the poor have always known. I think the Overground is absolutely fantastic, a truly democratic resource, but the effect it has had on property prices mean even that is a double-edged sword. I’m aware that we’re all complicit to an extent, I’m adding to the hype.

You’ve used the tagline “Tours that do good” before – can you explain a little about that?

I think anything that brings people together to connect with each other and provokes questions and debate is a good thing. Increasingly I encourage interaction on my tours, so we think issues through together and process them as a group, from slavery to Brexit. Hackney religious dissenters fought for ‘toleration’ and a common theme of many of the walks is how do we all rub along together in this incredible city and how do we make it even better? Context makes such a difference: chatting about employment rights and zero hours contracts takes on a new significance when you’ve heard the conditions that led to the 1888 Matchwomen’s and 1889 Dockers’ strikes. One of my key tour takeaways is this: “If London was so different 150 years ago, don’t listen to anyone who says you can’t change it today.”

I also do a little free work and volunteering and have started to give 10 per cent from Hackney Tours to places and people that have inspired me, like the trust at Abney Park cemetery or the campaign group for a statue of Mary Wollstonecraft in Newington Green (Mary on the Green). I suppose it’s the same concept as social enterprise: that you should give something back to the place that’s nurtured you.

Where in East London do Hackney natives rarely visit, that perhaps they should?

If there’s anywhere undervisited it’s the nature sites of Hackney and also Hackney Museum. Once you start to dig, no pun intended, there are some beautiful outdoors spots here. I’m not just thinking of the famous marshes but also the Dalston Eastern Curve Garden. That place is an absolute oasis of green calm in E8 and the lovely souls that run it make sure it’s open to all so it’s a proper community space.

Hackney Museum are total legends; I think they realise that the past is only useful if it helps you to understand the present and shape the future. Their work is always relevant and politically important. We have to embrace complexity: like any form of government the council has its failings but I work with committed people trying to improve health and access to culture via walking and the arts. 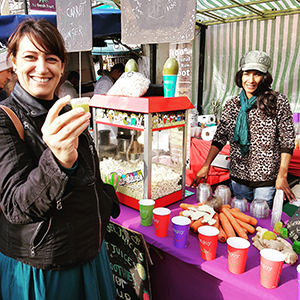 The juice is loose: a scene from a food tour on Ridley Road. Photograph: Hackney Tours

You gave a TEDX talk in Dalston (alongside representatives from Dalston Curve Garden and Hackney studio The Decorators) about ‘Building better cities’ – what kind of points did you make, and how could they play out in Hackney?

Funnily enough it was exactly about nights like that and about spaces like the Curve Garden, where people can come together and connect – because that’s how you build resilient communities. We’re like little hamsters in expensive cages sometimes and that can lead to a sense of powerlessness. When you bring people together in spaces of beauty and connect them, good things happen.

There were such different types of people in that room it was fantastic. From Hackney Wick to Dalston that’s active community: a sense of autonomy, agency and coming together.

Your tours are quite political – for example you’ve had tours that touch on Chartism, early feminism and gentrification – and you’ve mentioned that you have received some criticism for that. What drives that aspect of your operation?

I’m an idealist. I think you have to be, otherwise why are we here? And there’s a clear trajectory to civic activism: you discover, you care and then you act. I end up advocating for some of the really important causes I come across once I find them. Education means awareness.

There’s an annual speech commemorating the Chartists in Abney Park and I tweeted a pic of Corbyn giving one before he was leader. Someone from Stoke Newington tweeted that I should leave off politics. Don’t they know the history of Stokey? Dissent has been in the DNA of N16 for four centuries! Plus the Chartists were fighting for the vote – that is politics!

It’s emblematic of a situation where some people superficially buy into the end result – a scene or vibe – but skip the process. And the process is the key thing, as any artist knows. It’s a bit like moving next door to a music pub then complaining about noise. The radicals and reformers of alternative Hackney are the ones who’ve made it such an interesting place to live. Some of them were regarded as almost domestic terrorists, like the suffragettes were, but their ideas are now totally mainstream. 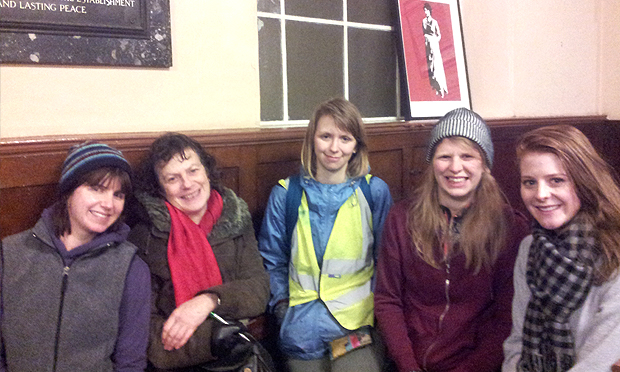 Some happy customers at the tail end of the Mary Wollstonecraft tour. Photograph: Hackney Tours

What do you have coming up for the rest of 2017 and beyond?

I’m getting older residents walking and connecting younger ones to opportunity on behalf of Hackney Council and I’m also training teenage tour guides in Camden. We need to bring stratified groups together. Collaborations, experiments and activist elements really excite me, so there’ll more of that in 2017: more advocating of education, learning, connection and community building with people like Echo, the skillshare network that I do the photowalks with.

I’m going to start doing more of my Stoke Newington radical history tours too, because 2016 taught me that you can never be complacent about things like rights and freedom – or values. Plus I’ve got nearly eight years of Hackney Wick experience to share and the battle to keep at least some of its soul isn’t over yet. I like to try new things like running tours happening and even walking debates exploring sustainability.

← Garden variety: a look at the Geffrye Museum’s plans for their grounds this monthGrenfell fire alarms firm in fraud probe over ‘defective’ work in Hackney →