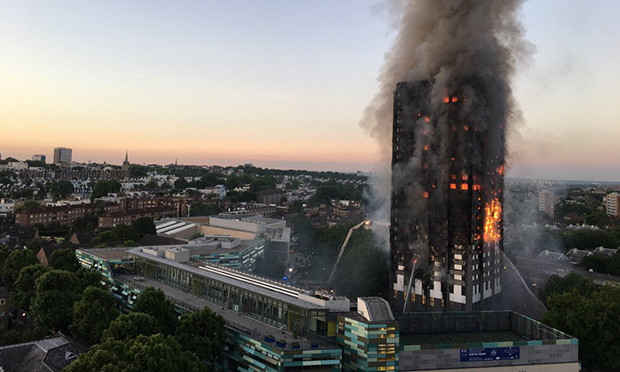 The company responsible for Grenfell Tower’s fire alarms is at the centre of a fraud investigation over work it undertook for Hackney Council.

According to the Town Hall, some of the fire safety works carried out between 2011 and 2014 by building firm Lakehouse and subcontractor Polyteck were found to be “defective”, including “incorrectly fitted fire alarms”.

The project was overseen by the council’s former housing management company Hackney Homes.

Lakehouse said there has “never been any suggestion of wrongdoing” on its part.

The Town Hall confirmed it has completed fire safety work on 68 blocks in question “to a standard that was fully compliant with regulatory requirements and our specification, and at the contractors’ own expense”.

Grenfell survivors have complained that some of the tower’s fire alarms, which Lakehouse was responsible for maintaining, did not go off during the blaze on 14 June.

A spokesperson for Polyteck told the Hackney Citizen that it was not involved in any fire safety work at Grenfell Tower.

Hackney’s mayor Philip Glanville said the council has now written to social landlords across the country, warning them to check any work done by Lakehouse or Polyteck, adding: “Whilst we don’t want to cause undue alarm, we want to give other councils the chance to check any works carried out by these companies.

“The issues in Hackney were uncovered during an ongoing fraud investigation and reported to the police immediately. A criminal investigation is still underway.”

Glanville added: “Grenfell and its aftermath raises many issues about the conduct of the construction industry, including sub-contractors, and also about arms-length management arrangements for housing. It is right that councils and social landlords should work together, share information and support each other to prevent future tragedies, which is why we have taken this action.”

Three men, aged 38, 39 and 44, were arrested on suspicion of bribery and have been bailed until November pending further enquiries.

Scotland Yard said five other men and two women have been “released under investigation”.

A spokesperson for Hackney Council said: “In 2014, Hackney Council’s Audit and Anti-Fraud team received allegations of fraud and overcharging relating to works carried out by Lakehouse.

“During subsequent detailed investigations, Hackney Council’s investigation team discovered that some of the fire safety works carried out during this period were defective, including incorrectly fitted fire alarms and emergency lighting systems.

“The Council’s primary focus was on the safety of residents, and it ensured, as a matter of priority, that these works were redone to the correct standard, and at the contractor’s own expense.

“Hackney Council immediately notified the police, and there is an ongoing criminal investigation. Hackney Homes was dissolved in 2016, with responsibility for housing management brought back in house.”

A spokesperson for Lakehouse said: “There has never been any suggestion of wrongdoing on Lakehouse’s part, nor compromise in the interests of resident safety.  Importantly in this regard, the press reference that Hackney drew the attention of the police to alleged sub-standard works is factually incorrect.

“Further, the Group can confirm that the £540,000 exceptional gain, reported on 27 June 2017 under “impairment of receivables” in our interim results to 31 March 2017, related to a series of successful adjudications by Lakehouse against Hackney for works Hackney alleged were defective and were determined to be fully due and payable.

“We continue to pursue Hackney for further sums which we are due contractually and for which they have refused to make payment to date.”

A copy of Hackney Council’s letter to all social landlords is available here.

Update: This article was amended at 14:40 on Wednesday 5 July 2017 to include a response from Polyteck, making clear that it was not involved in any fire safety work at Grenfell Tower.

Update: This article was amended at 18:45 on Wednesday 5 July 2017 to include a response from Lakehouse.