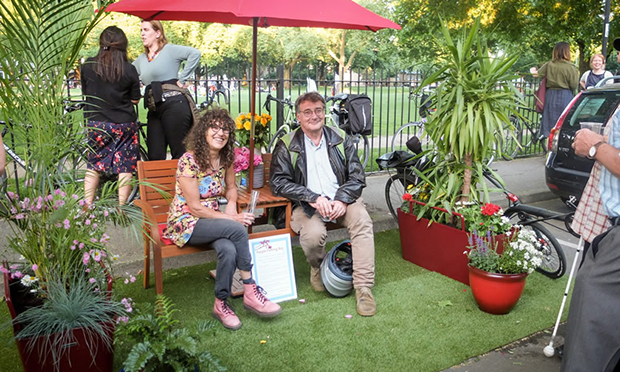 The creator of a popular parking bay garden in London Fields has been told to up sticks by the council – or face seeing her decorations wheeled away.

Pro-walking campaigner Brenda Puech was refused permission by the council to pay for a parking space for anything other than a car.

But the disability access consultant from Stoke Newington went ahead anyway, adorning the space with artificial grass, chairs, an umbrella and flowers. The parklet has proved a huge hit with visitors.

Puech said: “My bugbear is with the council’s housing department. I was served with a removal notice and was told someone had made a complaint. I asked the council about the nature of the complaint two weeks ago and I have still not received a reply.”

Her lawyers have appealed against the notice, claiming the council made a “wrongful decision” by not allowing her to purchase the parking spot for community use.

Puech, who campaigns for walking charity Living Streets, has also started a petition calling on Mayor Philip Glanville to let her creation stay. At time of writing, it had been signed by over 700 people. 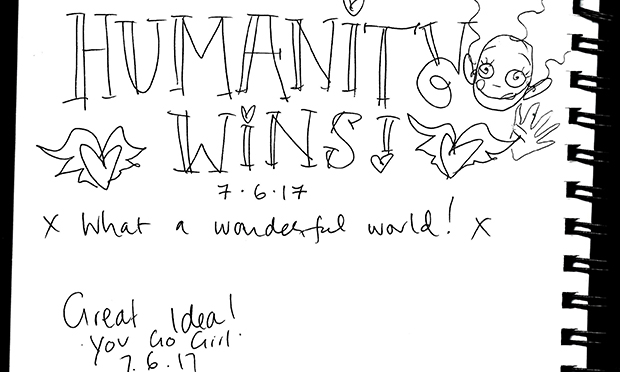 Support: a message in one of the guestbooks. Photograph: Brenda Puech

At the bay, visitors have filled nearly four books with supportive messages, with one writing: “Humanity wins – what a wonderful world.”

Puech is now urging the Town Hall to use the People’s Parking Bay as a trial, saying: “I’m proposing a pilot programme. The council can let this remain as a community initiative and gauge public reaction themselves.

“People in the community are looking after it. When it was vandalised, local residents helped clear it up and put it back together.

“I think part of the problem with the council is that this has come from the community rather than them.”

The Town Hall, along with Islington and Tower Hamlets, partnered with the Zero Emissions Network to launch a parklet in Shoreditch last month, which replaces two car parking spaces with seating, cycle bays and greenery.

But according to Puech, people don’t see the council’s effort as a “proper parklet”. She said: “Theirs is top-down and uses taxpayers’ money. The People’s Parking Bay is bottom-up and community oriented. It’s cheap and cheerful, and down-to-earth.”

Puech opened the space at the end of May, with Green Party London Assembly member Caroline Russell in attendance.

Russell criticised Hackney for wanting rid of the bay, saying at the time: “To be giving over the majority of our street space either to driving cars or storing them, when they are used five per cent of the time, it just seems completely extraordinary.”

Puech added: “The last census shows non-car owners outnumber car owners by two to one in Hackney. Why should all this space be reserved for drivers when it could be opened up to the rest of the community?”

A Hackney Council spokesperson said: “Despite high levels of parking demand in the borough, Hackney Council is committed to improving the quality of life for our residents and ensuring that the borough remains the most liveable and sustainable borough in London.

“We have demonstrated this commitment through recent projects to reduce through-traffic in our neighbourhoods, supporting walking and cycling, installing over 210 on-street cycle hangers providing secure cycle parking for our residents and creating a new Parklet in Shoreditch with support from local businesses.

“While we support the aims of the Living Streets campaign, Hackney Council does not allocate parking spaces to individuals, with parking permits giving residents or their visitors the right to park in a space in a parking zone.

“Where there is oversupply of parking we will happily look to see if this a better use for precious public space, but believe that it’s best to make sure that the views of all local residents and businesses are taken into account when deciding how to use our streets.”

The petition to save the People’s Parking Bay can be found here.

Update: this article was amended at 13:32 on Monday 3 July. The original article stated that Ms Puech had purchased a parking permit. Her application for a parking permit, and her offer to pay for one, were both refused.

Update: this article was amended at 15:46 on Monday 3 July to include a comment from Hackney Council.