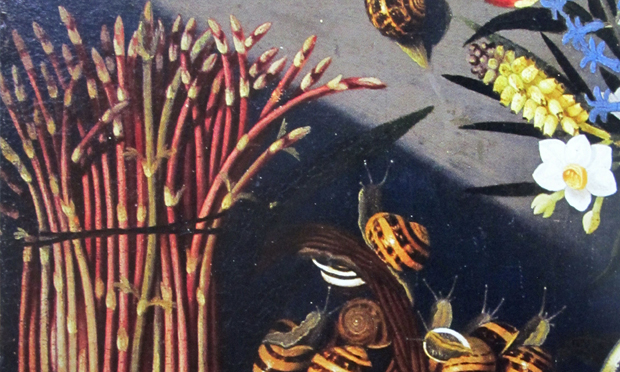 ‘Fat spears’: detail from a Caravaggio still life, featuring asparagus and some escargot

Asparagus was a well known and much loved delicacy in Ancient Rome – Martial said those from Ravenna were the best. Some writers claimed you got three fat spears to a pound. One wonders how long they took to cook. But there were wild versions too, skinny, wispy shoots with a stronger, more bitter flavour that could be parboiled and then grilled or roasted and eaten.

Asparagus is not the only young shoot that was eaten in the past – varieties of bryony, broom, fiddle-head ferns, and wild hops are tasty and available to foragers who can tell the difference between these and the poisonous ones. Best of all are the trimmings from the Kentish hop fields, when the plants are cut back in the Spring.

Many years ago I took a train to Maidstone, and walked along a canal path, loud with cuckoos and blackbirds, May blossom and meadow parsley, to what was then the Museum of Rural Life (now no longer a museum and simply called Kent Life). Under strict guidance, I filled a plastic bag with young hop shoots, inspired by Giacomo Castelvetro who had written in 1612 that they were a delicacy.

He was right, they have a sharp bitterness, which I mitigated by cooking briefly in salted water, and serving with olive oil, lemon juice and plenty of pepper. Costanzo Felici, a contemporary of his, physician and botanist, living in Rimini in the Italian Marches, wrote enthusiastically of salads in an unpublished essay in the 1560s, Lettera sulle insalate, which morphed into a joyful listing of all Italian foodstuffs, mentioning how they were grown and cooked. 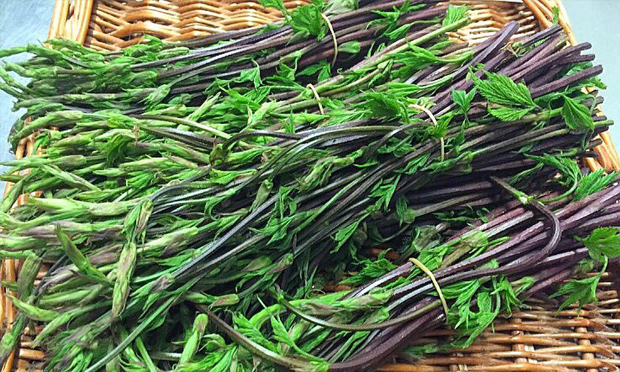 He had plenty to say about all these edible shoots and buds – asparagus the best (eaten boiled, grilled or raw, with olive oil and pepper, its usual condiment) then wild asparagus, hops, bryony, clematis vitalba, another kind of clematis, and butcher’s broom.

I thought of the perils for the ill-informed forager as I nibbled on a natural delicacy we used to call ‘bread and cheese’: picked from the hedgerows on the way to the village school. These were actually newly opened buds of hawthorn leaves, slightly bitter, but sweet tasting and harmless.

We abstained from the fronds of meadow parsley, with their all too close resemblance to hemlock, which once in the 1960s made a commune of hippies very poorly indeed. Safer are the lacy elderflowers that come later, which can be dipped in batter and deep fried, or made into fritters with ricotta and egg, with a little sugar and Parmesan. 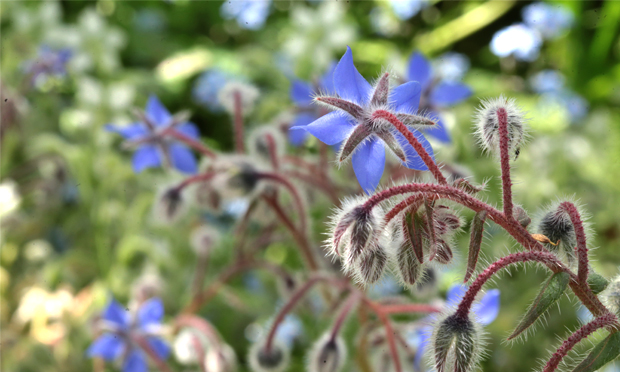 Some borago officinalis – aka borage. Photograph: Henry Hemming via Flickr

You don’t have to be a Hurray Henry to forage borage. The pretty blue flowers of the borage plant appear about the same time as asparagus. Forget about their association with the dreary mish-mash of ingredients that is Pimms; why ruin decent gin and lemonade or white wine with a silly flurry of fruit and veg? If you want to celebrate an achievement with friends, buy a decent bottle of white wine that has all the aromas of cucumber, elderflower, fennel, whatever… built into it, chill it well, and enjoy.

There are better uses for borage – the blue flowers have been an edible ingredient and food decoration since the Middle Ages, and they twinkle on salads and dull dishes like blancmange. The young shoots and leaves are delicious boiled. Borage grows semi-wild in unkempt gardens (mine), our local churchyard (St Mary’s) and many parks and gardens in Hackney. The flowers are around at the same time as asparagus and artichokes.

If you boil the living daylights out of them, the flavour gets chucked out with the water.

Best to prepare asparagus steamed, fried, roasted or grilled , then finished in butter or olive oil, with freshly grated Parmesan, mayonnaise, or hollandaise sauce. Or this risotto:

Make some stock with the discarded woody stems (you snap them off, but how to tell at what point? Well never mind, this way nothing is wasted) and simmer the asparagus itself with the carcasses of some shell-on prawns, garlic, fresh ginger root, a few chicken wings, and a slurp of fish sauce, nuoc mam (Vietnamese), or nam pla (Thai), to make a liquid for cooking a fishy risotto.

Cut the tips off the stems and keep to one side. Chop the rest of the stems into 5mm lengths, and cook for 15 minutes with the rice, preferably vialone nano, stirring in warm stock as it evaporates.

Then add the tips and cook some more, until the rice is just done, but still with some bite. Stir in the prawns and any other shellfish or chicken. You don’t have to follow all the classic Italian moves to make this version of a risotto, like the preliminary frying and the final addition of butter. 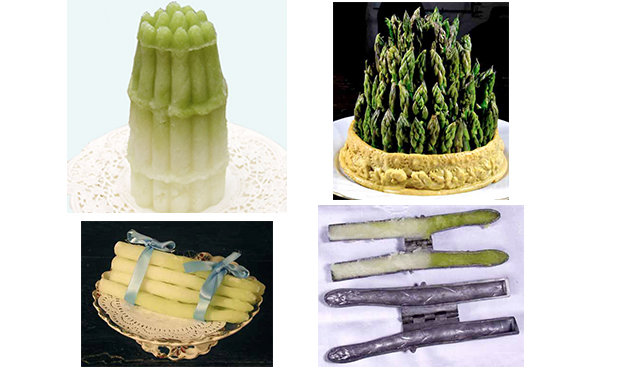 Some photographs of asparagus – and asparagus-shaped ices – from the fantastic Historic Food website. Courtesy of Ivan Day

The Victorian enthusiasm for fancy food was encouraged by the entrepreneurial Agnes B. Marshall, whose Book of Ices, published in 1885, gave recipes for every kind of ice cream imaginable. The polychromatic illustrations included glorious visions of ice cream frozen in complicated moulds presented as a fat hen in a nest surrounded by chicks, a cauliflower with its frill of green leaves, and a dish of asparagus, each spear moulded and coloured separately, tied together with a blue satin ribbon. (See second picture down on the right hand side.)

Not one of Heston’s finest, but a plain vanilla ice, presented in the good old fashioned tradition of ‘fake food’ where what you see is never what you get. Each asparagus spear was made in a mould 8¼ inches long, at 3 shillings each, carefully unmoulded, hand painted with edible pigments, and stored in Mrs Marshall’s ‘cave’ – a fore-runner of the freezer.

The process is described and illustrated by the food historian Ivan Day in his blog ‘Food History Jottings’ and his website ‘Historic Food’, where you can read more about these amazing images and glamorous ways with asparagus.

Ivan Day’s blog is at foodhistorjottings.blogspot.com and Historic Food can be found at historicfood.com