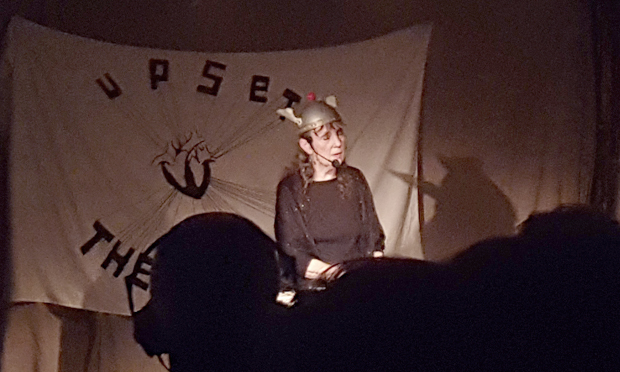 It’s 20 June, the day before the longest – and what proves to be the hottest – day of the year, and Cafe Oto is boiling. If it were a person right now, it’d be of the lobster-coloured variety, lolling back on the beach with a pint and a hankie on their head.

As ticketholders drink and preen outside, NTS Radio are setting up their tech to stream the night’s gig on Facebook Live: headliner, Susan Dietrich Schneider – better known as San Francisco street musician turned astral guardian of lo-fi, The Space Lady. 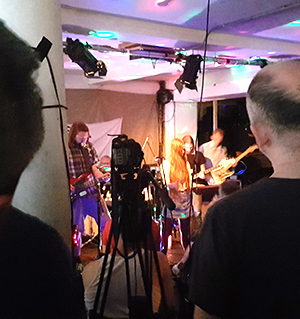 All things considered, I contemplate heading out for a bag of ice, or possibly heading home to my laptop and tuning in in relative comfort, while opening six-piece Flowers Must Die setup their many instruments (the standard guitars, bass, drums and keys, but also a theremin and some other exciting twiddly bits).

Flowers Must Die are a Swedish group who play loud prog rock, as their instrumentation may suggest. I say loud – their set begins with rattly drums and quiet, East Asian-influenced guitar, that almost sounds like twangy Japanese instrument the shamisen.

All very expertly performed (the band have been playing together for over ten years) but when’s it gonna kick off? Well, somewhere midway through their set, vocalist/thereminist Lisa Ekelund starts howling, the bass deepens, the guitars go all disco, and Flowers Must Die expose their thrilling side.

‘Why?’ from full-length debut Kompost grinds away in satisfying psychedelic fashion. People who earlier fled the heat gasping start to filter back inside. By the time the keyboard player is hunched over, surrounded by a hail of sound, frantically turning knobs on an effects pedal with a microphone in his mouth, I’m hooked.

Hundreds begin to watch online as The Space Lady takes to the stage, enthusiastically introduced by her grandson Skyler Wright. I think back to when I saw The Space Lady in Brighton several years ago. (Her performance that night saw everyone in the village-like surroundings of West Hill Hall stood slack-jawed and mesmerised – aided by a light show from the brilliant Innerstrings, the whole show was a true Close Encounter.)

On that occasion, she was accompanied by her husband, the folk singer Eric Schneider, who sadly died last year. Joel Dunsany, former husband and music partner of 30 years, as well as writer of Space Lady signature tune ‘Synthesize Me’ and the one who gave her her now-trademark light-up winged helmet, has also passed on. So with all this loss to bear, and with Trump and everything else that Dietrich Schneider stands against as an original flower child, can she still shine? 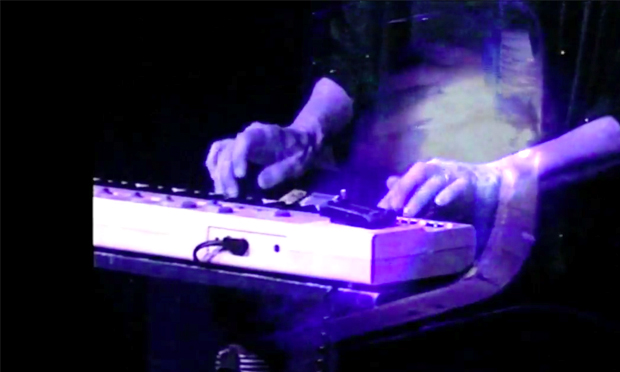 The roasting crowd is happy to see The Space Lady, and she only boosts the seratonin by launching straight into her delicate reworking of ‘Strawberry Fields Forever’ by The Beatles. Arpeggios cascade from the Casiotone MT-40 she traded her accordion for in the early eighties, with her echoing voice – similar to Just Another Diamond Day artist Vashti Bunyan’s fragile-yet-pure tone – applied over the top.

Despite an attack on her voice by “alien pollen”, on she steams through her fuzzed out keyboard versions of an alternative American songbook – through her covers of ‘I Had Too Much To Dream Last Night’ by The Electric Prunes and Steppenwolf’s ‘Born To Be Wild’. A cowboy song (‘Ghost Riders in the Sky’, written by Stan Jones in the year of The Space Lady’s birth: 1948) is followed by an Amerindian song. “It’s only fair,” she explains.

When The Space Lady gets to her originally written tracks, the crowd are smitten beyond belief. The mass singalong of ‘Oh Brave New World’, a new song that The Space Lady strums on the guitar, might read to cynics as a little hokey or on the nose, but it doesn’t feel like any cynics are here – it’s too hot to be so hard-hearted, and it’s a sweet song.

The aforementioned classic ‘Synthesize Me’ brings the energy back up with its girl-group pop verses, and her version of ‘Major Tom’ by Peter Schilling continues this danceable section with its questing rhythm. A haunting rendition of John Lennon’s ‘Imagine’ spirits everyone back out into the the fresh air, as the gig ends.

The next day, looking back through the comments on the NTS stream – every single one positive, if you can believe such a thing can happen on the internet – I still conclude that, despite the heat and the opportunity for digital convenience, it was well worth coming to see The Space Lady in person, to witness the celestial magic she’ll always be able to weave with her old Casiotone MT-40. Those who haven’t heard The Space Lady should get acquainted with her Greatest Hits on Night School Records as a matter of urgency. Cosmic.

You can watch the gig in question here on the NTS Radio Live Facebook page.