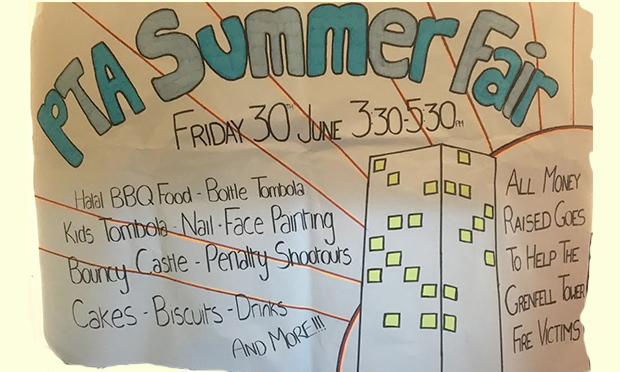 Support: the children of Berger Primary have crafted promotional material for their charitable fair

A local primary school is donating proceeds from a summer to fair to help the victims of the Grenfell Tower fire.

The Parent Teacher Association at Berger Primary School, Homerton, has announced all proceeds from this year’s summer fair will go towards the relief effort.

This year’s event will include bouncy castles, a BBQ, sales stalls, and a raffle with prizes donated by local businesses.

President of the PTA Michelle Herbert said: “Our hearts are with those suffering because of the tragic Grenfell Tower fire.

“As Londoners, the volunteers of the Berger Primary School PTA feel this is very much a part of our community, and we really want to help, and therefore we have decided to donate all proceeds raised at this year’s summer fair to the Grenfell relief effort. We welcome all to the fair.”

The fair is open to the public and will be held on Friday, 30 June, from 3.30 pm until 5.30 pm for all of those wishing to help and show their support.

An estimated £2.8 million has been raised through private donations and Just Giving campaigns to help those affected.

Those wishing to donate can do so here.