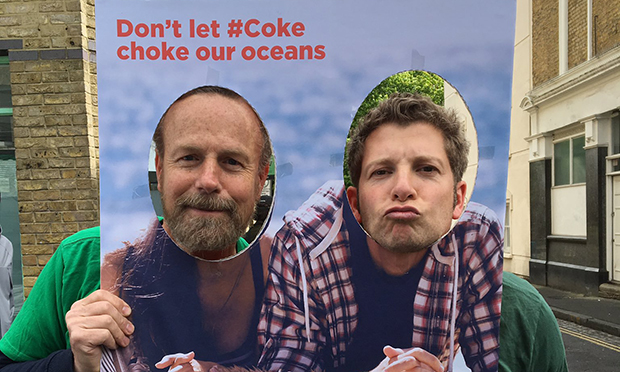 Ocean dreams: volunteers get their message across. Photograph: Greenpeace

A group from Shoreditch Greenpeace set up shop at Broadway market on Saturday to warn locals about the impact the “world’s largest drinks company” is having on the environment.

A recent report by the charity estimated that Coca-Cola manufactures 100 billion throwaway plastic bottles every year – over 3,000 a second. 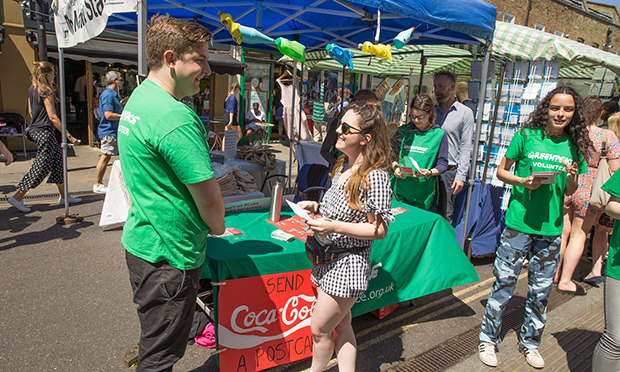 Fearghal, a Greenpeace activist from Hackney Central, said: “In the UK alone, 16 million plastic bottles end up in our environment every single day, but the companies that profit from them are trying to wash their hands of the problem.

“As the world’s largest soft drinks company, Coke has a particular responsibility to drastically reduce its plastic footprint and stop its bottles from ending up on beaches and in waterways. Ninety per cent of seabirds have ingested marine plastic. Our oceans simply can’t stomach any more of Coke’s plastic, and why should they have to?”

The group wants a commitment from Coca-Cola that it will ditch plastic packaging and instead focus on reuseable bottles.

Over 300 market-goers echoed the demands by writing postcards, available at the Greenpeace stall, to the drinks company’s head honchos.

Greenpeace also wants the UK government to introduce a deposit return scheme (DRS) for products like drink bottles. The scheme, which has seen success across Europe, means customers pay a small deposit on products like soft drinks, but get their money back when they return the packaging. The material can then be recycled or reused.

In a statement released earlier this year, Coca-Cola said: “We support recovery and recycling of our packaging and we want to help find ways to ensure that less of it is littered and ends up in the sea.  Whilst we support and participate in DRS in some countries, in some cases we have believed a different approach could be more effective and more sustainable than DRS – and in the UK we have raised some concerns about the impact of a DRS scheme on household recycling rates. However, we are open to engaging in constructive dialogue and working with others to create effective, long-term solutions.”