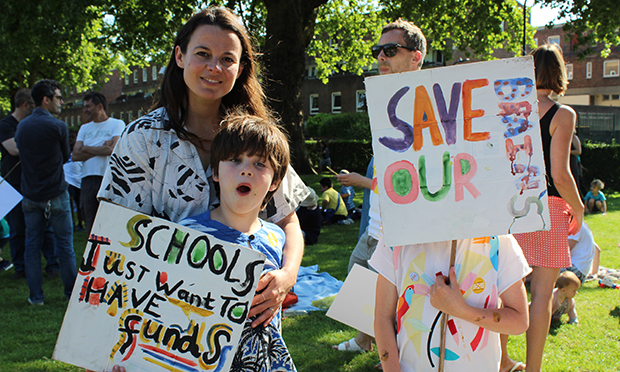 Parents and children flocked to Hackney’s parks to campaign against government plans to slash school funding.

Hundreds of mums and dads, pupils and teachers came together yesterday (Friday 26 May) to demand an end to Whitehall proposals that are set to strip £26 million from Hackney schools over the next two years – the equivalent of £914 per pupil.

The demonstration was part of a national day of action organised by Fair Funding for All Schools (FFfAS), a parent-led group which wants to draw attention to the consequences that a new national funding formula will have on the quality of education.

Children from more than 25 local schools led the marches from their playgrounds into seven of the borough’s green spaces, including London Fields, Well Street Common and Daubeney Fields.

Many chanted ‘No ifs, no buts, no education cuts’ as they marched around the park before stopping for a “picnic protest”.

Plans to be introduced in 2018 by the Department of Education will change the national funding formula, which means money from areas such as London will be channelled into regions that receive less funding.

London boroughs will be particularly badly hit, with Hackney facing some the biggest cuts in the country. 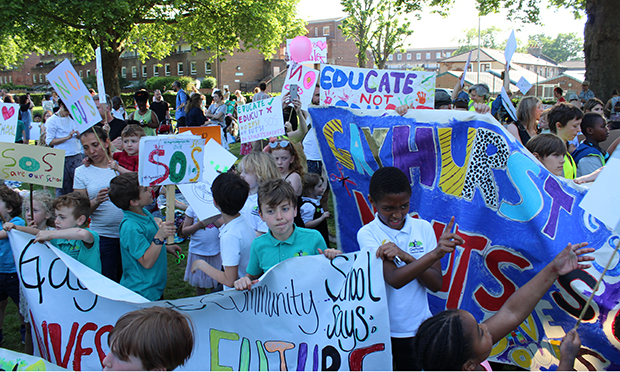 Speaking at London Fields, Hackney South MP Meg Hillier said: “The so-called fair funding formula is anything but fair. London schools are amongst the best in the country and it seems utterly crazy to take money away from the best schools and direct it to other schools in the country.”

Questioned about the impact of budget cuts in her constituency, Hillier added: “Teachers in Hackney say the only way left to save money in schools is by reducing staff.

“Up to 700 teachers could go at secondary level and that could mean a smaller curriculum. Schools may have to stop teaching geography or history after Year 9. It’s just not fair on the kids.”

Liberal Democrat Dave Raval, who also made a speech at the London Fields rally, said his party was “totally opposed to the proposed Tory cuts”.

Raval, who is standing in Hackney South in June’s General Election, later told the Citizen: “It’s worth remembering that, in government between 2010 and 2015, we stopped the Tories from cutting school budgets. Moreover, we actually made large increases in budgets by introducing the ‘pupil premium’, which increased funding for schools with poorer children. And we brought in free school dinners for younger children, which Theresa May plans to snatch away.

“You may not hear much about it in the national media, but the Lib Dems have put in more funding to schools in the UK than any other political party since 2010 and that’s a record we’re proud of and want to continue.”

Parents rallying in London Fields expressed their fears over a potential decline in the quality of local schools, many of which are among the best in the country – protestors pointed out such achievement could not have been possible without the cash injection received in the last decade. 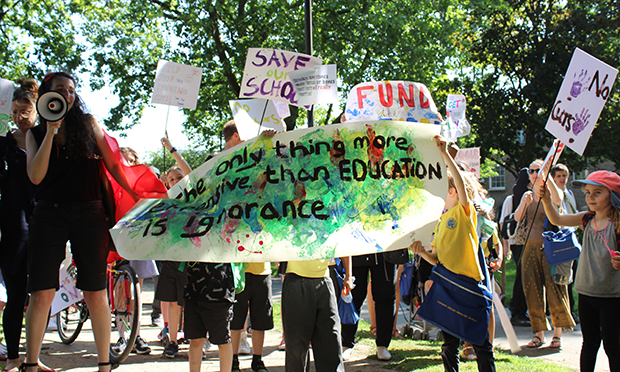 Loic Seurot, whose daughter attends Queensbridge Primary School, said: “This is an outstanding school, and there are already more than 30 kids in each class. That’s a lot, and if there are more cuts it will mean fewer teachers, so the numbers of children per class is bound to increase. Teachers will have trouble managing classroom behaviour, and will not be able to spot issues that some children may have.”

Mother-of-three Kylie ap Garth expressed similar worries. Two of her children are enrolled in London Fields Primary School, where they are looking at the loss of eight teachers’ salaries by 2019.

“I’m really worried that London Fields School will go back to the time when there were lots of social problems,” she said. “It has taken the community a lot of hard work to get to where we are in terms of the quality of education our children receive. All that effort could be lost. We’ll go back to the past, and it’s not something I want.”

Tom Hunter, whose two daughters attend Gayhurst Primary School, said he was worried about the impact of the cuts on poorer families: “At our school, we have lots of kids with learning disabilities, kids with big families, kids who don’t have English as a first language, kids with special needs and so on, who they get huge help from the teachers. If this support is cut, it will stop many children from impoverished families from attaining their goals.”

The protests are the culmination of two weeks of action across the country.

Speaking to the Hackney Citizen, the borough’s mayor Philip Glanville said he was committed to supporting the campaign: “We’ll continue asking the government to stop threatening the quality of education with these cuts,” he said.

“I grew up in a time where the toilets were outside and we had to campaign to get photocopies. I don’t want to see Hackney going back to that.”

Find how the new funding formula will affect your local school here.

More information at Fair Funding for All Schools.