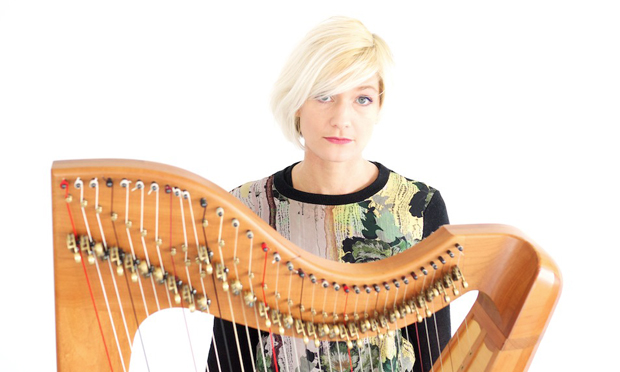 Harping on: Fraya Thomsen and her Celtic harp

Acclaimed harpist Fraya Thomsen will perform songs from her project Community and Stardust at Well Street’s NuDawn space on 4 May, followed by a short Q&A session.

Thomsen, who originally hails from the Scottish Highlands, is well-known as a composer for the Celtic harp (as well as for larger ensembles) with many a film score under her belt. Her compositions even appear in Scottish music grade exam books.

During an appearance on BBC Radio 2’s The Arts Show, presenter Jonathan Ross encouraged her to crowdfund the recording of Community and Stardust, and this is in the works.

Speaking to the Citizen, Thomsen explained more about the background of the project, which was commissioned by Celtic Connections as part of their New Voices series this year: “I suppose it’s been quite an interesting journey for me, to be living in a community where initially I didn’t really know anybody apart from my uncle.

“Just to be composing on my computer every single day, and feeling a bit isolated by being far away from friends in Scotland, stuff like that. I started researching and discovering what it is to have people around you and to feel part of something bigger than just yourself.”

This informed the main themes of connectivity and empowerment in Community and Stardust, and there’s also a touch of politics, as Thomsen explained: “There’s quite a few socialist songs in there, and socio-political ideas in the lyrics.”

Having lived in Hackney for two-and-a-half years, the gig next Sunday will see her make the short hop to NuDawn, harp in tow, to play and sing “downsized” renditions of Community and Stardust songs, as well as more of her Joni Mitchell-influenced solo work.

Her other band The Duplets, which teams Thomsen with fellow musician Gillian Fleetwood, is also renowned in the Gaelic music community, having toured their intertwining harp and vocal music worldwide.