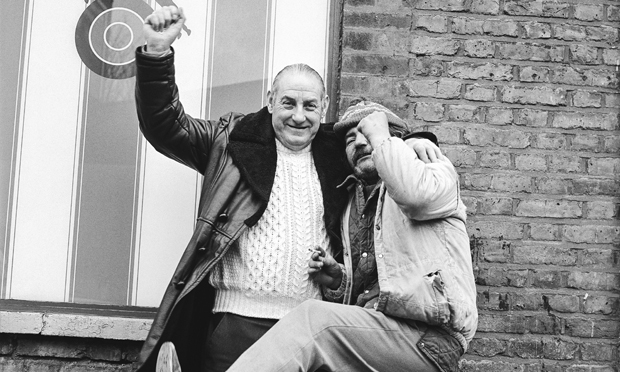 “Two older lads on the razz”: detail from Dalston in the 80s. Photograph: Andrew Holligan.

Dalston in the mid-80s: bustling markets, poet-friendly rents, a diverse population and billboards foreseeing the demise of the GLC. As Thatcher’s government set about the fragmentation of London’s power to oppose, New York-based fashion photographer Andrew Holligan packed his bags and crossed the Atlantic, arriving in East London in the Spring of 1984. For his American wife, it was the “back of beyond” – not even a tube line out.

Camped in a friend’s flat above a betting shop off Ridley Road Market, Holligan watched from the kitchen window as his new world played out below. He saw a bloke from the Eastern Bloc constantly “tinkering under the bonnet of an old Mini”, and he rushed out into the street on the evening Prince Philip stopped by, snapping the Royal wave and turning his lens on a group of Dalston ladies opposite.

These ordinary women – and their smiling faces – inspired a change in his photography. Fashion was suddenly “too predictable”, so he invested in a 1950s Rolleiflex and took to the streets. More than 30 years on, Hoxton Mini Press has published a series of Holligan’s best shots from this period, under the title Dalston in the 80s. It’s a fine collection, casual and affirming, a document of everyday life in a place bursting with culture and steeped in challenge. 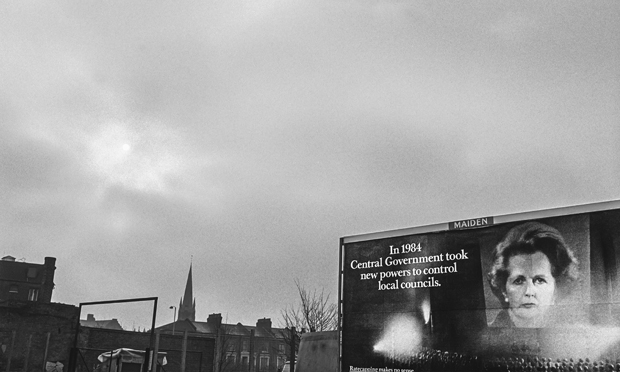 The book begins with a double-page spread showing Thatcher’s stern gaze on a placard (above), accompanied by the text: “In 1984 Central Government took new powers to control local councils.” It’s both rebellious and Orwellian, and it sets in motion a political current that runs beneath the work’s otherwise fairly quotidian tone. What immediately follows is grimly urban – grey and industrial, bordering on derelict.

Then arrive the people, and with them life in its many colours: the aforesaid women, smoking and whispering cheerfully; Holligan himself, crouching for a self-portrait in the mirror; two older lads on the razz (left), celebrating a win at the bookies – not to mention a hoard of young families, the local working class in fine fettle, a record-stall legend and a mysterious bloodied youth. 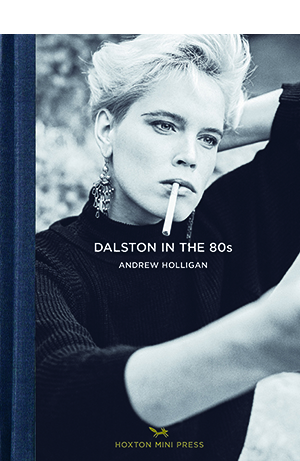 All this is set against a backdrop of social turbulence and upheaval, with the miners’ strikes, the rise of the yuppie, anti-apartheid and the formation of the BNP all touched upon. There’s also evidence of the era’s pop culture, with cameos for the likes of Rambo and Mr T.

Short lines of scrawled text explain many of Holligan’s precisely framed black and white pictures. This informal approach endows the collection with an overtly personal, journal-like feel. This blend of public and private – the wider political landscape and its impact on the everyday experience – is extremely effective. Dalston in the 80s is brief and light, but look closely; it has a lot to say.

← New wildlife-friendly reedbed coming to ClaptonDiane Abbott MP: ‘The only real solution to the housing crisis’ →