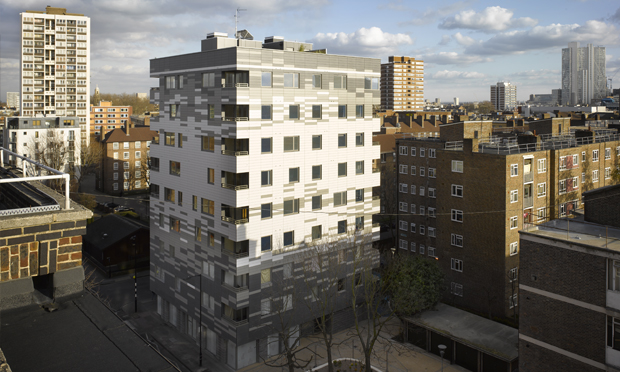 Justin McGuirk, in his book Radical Cities, draws a useful distinction between modernist and activist architects: “The modernists began with bulldozers,” he writes, “activists begin with a prototype.” It’s a fascinating, hopeful text exploring Latin America as a testing ground for radical urban development, particularly with regards to the “informal city” – covering, for example, the revolutionary potential of favelas and barriadas. He doesn’t, however, focus a huge amount on sustainability, nor – naturally – do we learn much about innovation in the UK.

For Waugh Thistleton, a Shoreditch-based architectural practice with visionary spirit, the green future of high-density housing lies with timber, which can be manufactured into cross-laminated panels – ideal for cutting costs and construction time – with zero carbon emissions. In fact, the whole process becomes more environmentally friendly than usual, not least because the building programme is shorter, the foundations are reduced and there is little need for tools such as cement mixers and tower cranes.

Waugh Thistleton’s prototype was Stadthaus, a nine-storey apartment building erected on Hackney’s Murray Grove in 2009. It was then the tallest of its kind in the world, and its construction was documented in a short and smart dual-language publication called A Process Revealed, written by Henrietta Thompson. It’s a somewhat drily delivered report, but it’s easy enough to read and its content is invigorating. It forms a step-by-step guide for those looking to emulate the project and reap the benefits of the prime material concerned.

The book is a modest 90 pages long, with chapters dedicated, for instance, to 21st century timber, sustainability, innovation and the future. A series of well-taken images by photographer Will Pryce run throughout and complement the text considerably, while a stack of design diagrams add a simultaneously artistic and scientific element – full appreciation of these might require some time and close analysis. 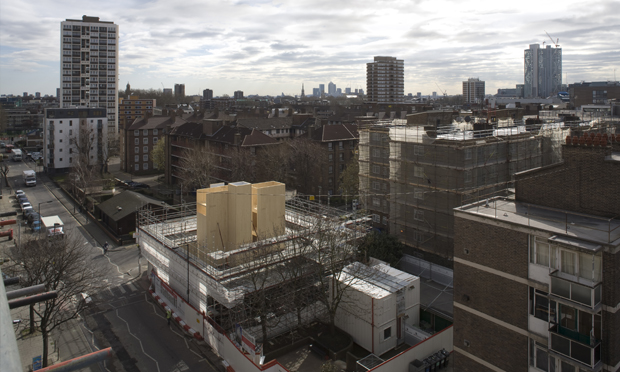 The timber, it’s explained, was sourced from Austria, a nation of which 47 per cent “is given over to woodland”. The country’s dense forests, integral to its economy “both in terms of [timber’s] value as a raw material and as a way of life”, are carefully regulated, with the level of felling not permitted to surpass new growth. The panels were manufactured in Murau – “Austria’s timber heartland” – within a closed-loop process, before being transported to the UK over 20 journeys, at a cost of 1.7 tonnes of carbon per trip.

This transportation stage was the most expensive in terms of damage to the environment and is an area that Waugh Thistleton pledged to address in the future, considering the possibility of more localised plants.

The actual construction phase – of which less than a month was spent on site – is described in decidedly pleasant terms, reflecting on an unrecognisably “clean, relatively dust-free and quiet” environment. In keeping with the portrayal of a calm and harmonious workplace, the assemblage is reported as having a grace akin to that of building a “giant wooden Jenga block”. The client, Telford Homes, and the architects consulted with local stakeholders, negotiating deals of mutual benefit, including the construction of a children’s play park in return for the loan of a stretch of then derelict land to accommodate deliveries.

This collaborative, socially cohesive approach is encouraging to read about, laying the foundations for positive relationships between developers, councillors and residents’ associations, all of whom were given the opportunity to appreciate the proposals and air any concerns they might have.

The final product, which if you’ve seen it you’ll know, is a striking vision. Inspired by the abstract paintings of Gerhard Richter, its façade is composed of an uneven display of black, grey and white panels conveying a pixelated effect. It was designed “with respect to the adjacent neighbourhood, which largely comprises 1950s brick-based local authority buildings”. Stadthaus is comprised of 29 flats, ten affordable and 19 private, with a particular emphasis on access to external space – every flat, for example, features a balcony.

Waugh Thistleton has since continued to specialise in timber, leading successful, pioneering projects in Dalston, Shoreditch and further afield. But it’s not the only company experimenting and pushing boundaries with the material. I recall an initiative led by Roderick James Architects that involved a group of students at West London’s Ark Burlington Danes Academy – a school with a high level of pupil premium – coming together to build a sustainable timber house on the grounds in Wood Lane.

So there seems to be something in the material that lends itself to, and inspires, a degree of activism, of positive, socially conscious architecture. The final two paragraphs of A Process Revealed offer a brief and eloquent account its qualities:

“Timber is the world’s most natural form of shelter. It makes for beautiful, firm, peaceful spaces that breathe and regulate their temperature naturally. To build with it is to experience a quiet, adaptable construction site where the conditions are humane and methods traditional. The trees that are cut down to build with are replanted, and at the end of the building’s life it can be dismantled and recycled… Today this highly evolved material presents incredible potential for a fresh approach to architecture and construction in the twenty-first century.”