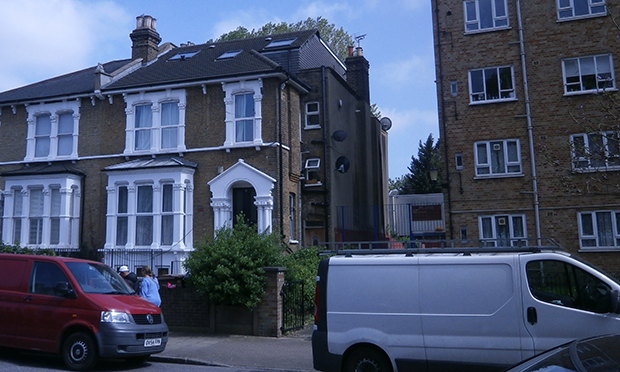 Illicit: the landlord copped a £40k bill for the extension. Photograph: Hackney Council

A landlord has been told to fork out £40,000 in court fines after an eight-year battle with Hackney Council over a dodgy roof extension.

Sternglade Ltd was also ordered to pay the Town Hall’s £1,760 costs and a £170 victim surcharge at Thames Magistrates’ Court earlier this month.

A warrant is out for the arrest of the company’s director Michael Scharf, who repeatedly failed to show up in court, after he was charged with failing to comply with a council enforcement notice.

The conflict started back in 2009 when the roof of a Victorian villa on Evering Road was extended at the side and the back without planning permission.

When the demand was ignored, the council prosecuted, resulting in a conviction at Thames Magistrates’ Court in December 2010. Sternglade Ltd pleaded guilty and was forced to cough up £4,700 in fines and costs.

The landlord then won the council’s approval for a scheme to replace the illegal roof – but still failed to rectify the building. When the permission ran out in 2015, the council prosecuted for a second time, leading to the hefty fine handed down this month.

The Town Hall’s planning supremo Guy Nicholson said: “This company not only ignored the council’s enforcement notice but even when they had the chance to correct the works they didn’t take this opportunity.

“The council is there to apply planning rules that support and enable safe and appropriate development in the borough. However, the council won’t hesitate to take legal action if those rules are broken and no effort is made to rectify an unauthorised development.”