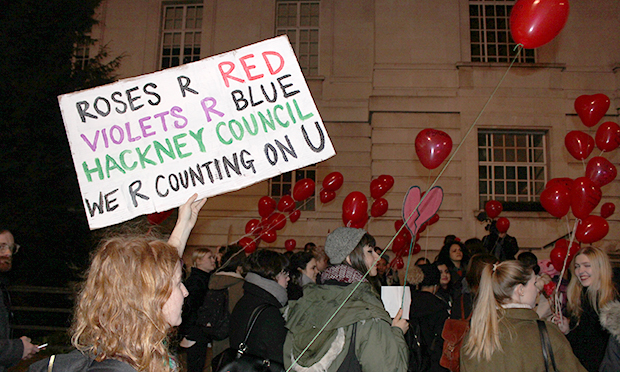 Over 100 people filled the air with red heart balloons and listened as members read out the names of all the women killed by domestic violence in the past year. 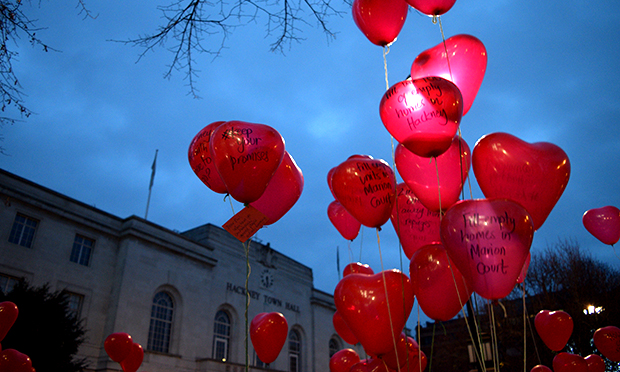 One survivor told the crowd: “When I was nine, my best friend’s mum was murdered by her dad on the estate I grew up on in East London. When someone is going to hurt you that much, one thing that can really protect you is having a safe house.”

Sisters Uncut hit the headlines last year when they occupied a flat in Marian Court to draw attention to “the lack of safe, secure housing in Hackney for survivors of domestic abuse”.

They say Glanville is yet to deliver on a pledge he made to them to fill all the empty units in Marian Court by Christmas 2016, and is still placing survivors in private hostels despite a commitment to use only council-run safe houses with properly trained staff.

According to Sisters Uncut, the mayor has also failed to commission research into the introduction of secure hostels in the borough.

One activist, Maeve, said: “Glanville made a lot of promises and he has broken all of them. This protest is to remind him to keep his promises. He said he would set up hostels and make sure all the properties at Marian Court were used to re-house survivors – so far, only five have been filled.” 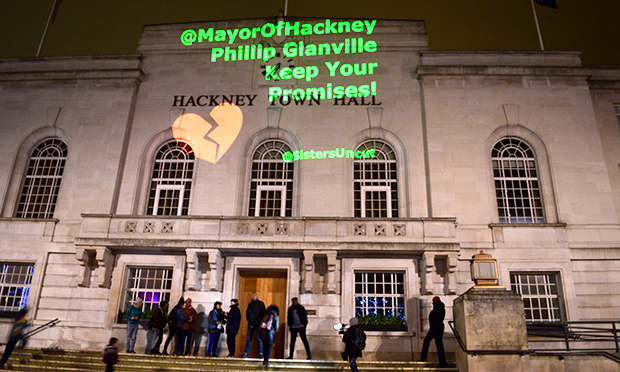 Last night’s event culminated with members lighting purple flares and projected their demands onto the Town Hall in an eye-catching demonstration.

They also posted hundreds of letters, signed by supporters across Hackney, which remind the mayor of the promises he made. 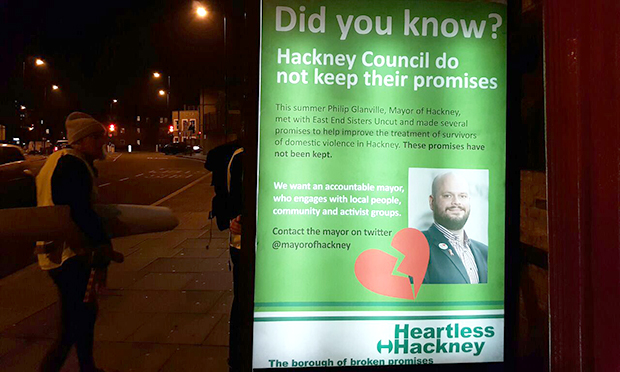 Ad and subtract: the group has been running an ‘Ad Hack’ campaign. Photograph: Sisters Uncut

The group has also been running an “Ad Hack” campaign, replacing posters all over the borough with their own messages.

Sisters Uncut member Nadine said: “This is not some abstract game we are playing with mayor Glanville. Women are dying and becoming homeless because of his stonewalling. People are experiencing the horror of losing their home. We want Glanville to act. Now.”

But Glanville hit back at the group following the protest, saying some of their claims are “simply not true”.

He admitted making “a number of commitments about expanding our use of empty homes for temporary accommodation, renewing staff training and exploring if we could use hostels more appropriately” and said that progress had been made on each of them.

He added: “Some of these changes take time, and I’m frustrated that we haven’t been able to make as much progress as I’d have liked. But our commitment remains resolute – we will do everything we can to improve the domestic violence services we provide and make sure that anyone experiencing abuse knows that when they are ready, we are here to support them.”

Glanville fired off an invitation to Sisters Uncut to join the council and its partners in fighting against domestic violence “rather than launch protests that have previously caused thousands of pounds worth of damage to the Town Hall – money that could be better spent on frontline services.”