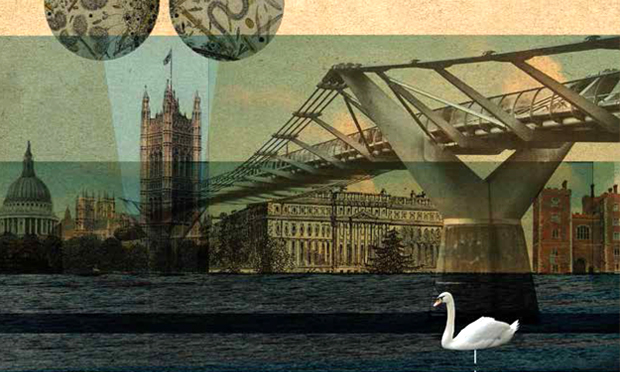 What does a loaf of bread have in common with a lump of coal, a saucepan lid and a pair of knickers? They’re all Cockney rhyming slang for cash, of course: dough, wonga, quid and nicker. They also appear together – hovering like UFOs over the Bank of England – in a bizarre, collage-like illustration that accompanies the money section in Edward Denison’s 30-Second London, a guide to the 50 key visions, events and architects that shaped the city.

“If it is true that money makes the world go round,” reads a brief accompaniment, “then London must be the centre of the world.” It’s an interesting, if slightly depressing, page of neat information describing the evolution of the city’s capital – its “lifeblood”.

Denison runs rapidly from the Royal Mint, housed in the Tower of London between 1279 and 1810, to the development of Canary Wharf in the 1980s. The main paragraph, entitled “the 30-second tour”, is flanked by a “3-minute overview” of the language of money, a list of the book’s “related topics” and a “3-second biography” of Isaac Newton, who served as warden and master of the Royal Mint in the 17th and 18th centuries. This is the general structure throughout the text.

With finance forming just one part of London’s multifarious identity, at the other end of the scale is the book’s spread on refuge, a particularly pertinent theme at present. Matthew Shaw, librarian of the Royal Institute and one of many expert contributors, describes the sanctuary London has given those “fleeing from harm or seeking a place of greater political, religious or even sexual tolerance.”

He skips through, for example, the Protestant Huguenots escaping persecution in France, the radicals Karl Marx and Sun Yat-sen and the thousands of Jews who fled the Eastern European pogroms to settle in areas such as Whitechapel. It is to this history of tolerance that London owes its rewarding cosmopolitanism – a characteristic that must be cherished in difficult times. 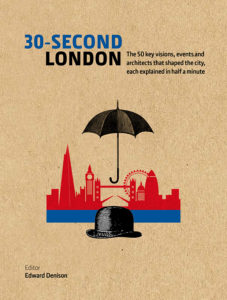 Other highlights include a section on architecture – covering modernism, brutalism and the battle of the styles – and a nice chapter on arts and culture. Profiles of Boudica, Christopher Wren and Jeremy Bentham are not to be missed, and a short piece on subterranean London is intriguing.

If you want deep analysis of the holistic history of London, I’d start with Peter Ackroyd, but if you’re simply losing sight of Johnson’s old adage – “when a man is tired of London, he is tired of life” – and need a quick reminder of our capital’s allure, then have a browse of 30-Second London; it’s a bright and buoyant work and need only take up a few hours of your time.