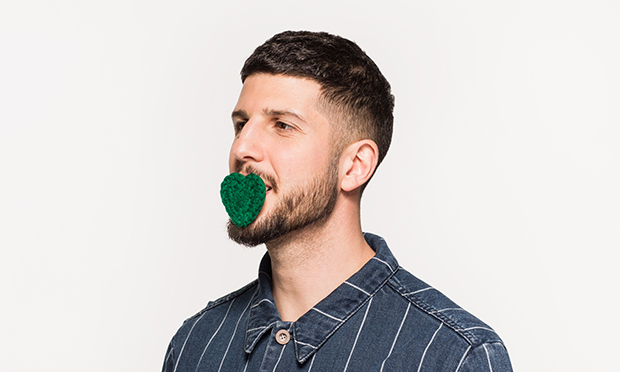 Award-winning Hackney poet Anthony Anaxagorou wrote the stirring words that feature in a new short film for a campaign about climate change.

The film is the cornerstone of the annual #ShowTheLove campaign, organised by the Climate Coalition, a group of 130 charities from across the world. The movement, symbolised by a green heart, wants the government to move within a generation to a situation in which the UK’s energy needs would be met entirely by clean and renewable energy.

Anaxagorou, 33, wrote the film’s haunting verse, I’ve Heard Talk, in just a few weeks. He believes climate change is the “most pressing matter of our time”.

He said: “I went to Sri Lanka with Amnesty International and I spoke to locals about the impact of climate change on their economy. It’s clear that people in the poorest parts of the world are the ones who are most adversely affected.”

The health of the planet has come under intense scrutiny after America’s newly elected president, Donald Trump, recently threatened to pull out of the Paris Agreement, a wide-ranging series of measures, signed by over 190 nations, aimed at tackling climate change.

“I think Trump wants to pull out of anything that involves a modicum of humanity,” Anaxagorou said. “He’s pro-capitalism, pro-business and anti-life, so it doesn’t come as a huge shock.

“It’s proto-fascism at its finest with Trump. He embodies mankind’s most abhorrent qualities.”

The poet admits he is worried Trump could undo years of campaigning that has stalled the building of oil pipelines in America and brought world leaders together for the Paris treaty, but he believes knowledge of climate change is now too widespread for the president to reverse all progress.

“People are fully aware – including scientists, politicians, even capitalists – that the climate is not the same as it was 15 years ago. It’s obvious, and the rapidity of the change makes it even more clear.

“I remember walking around in a jumper last December. When I was a kid, I needed to wear 50 layers to go out at that time of year.”

The film’s director, Stuart Rideout, said: “We wanted to take the viewer on an emotional journey, from our impact on the world around us, making us aware of our place within our environment, to reminding us how incredible our planet is.

“I felt we needed to create a sense of jeopardy and joy so this was part of our brief to Anthony Anaxagorou, to write a poem that engaged with these themes, and wove a journey through them.

“We then wanted the second part of the film to give a sense of optimism that is borne out of us engaging with and appreciating the immediate world around us and looking at it from a more local point of view.”

Anaxagorou is all too aware of the impact environmental damage can have locally.

He said: “I live in Shoreditch and I can’t breathe half the time. When I get into bed, I can feel the pollution in my lungs.

“These are pressing matters. Climate change is no longer a bunch of hippies waving placards – it’s scientists, businessmen and experts.

“We can’t pontificate any longer. Something needs to happen now.”

A Love Song is to be shown in participating Picturehouse cinemas from 10-17 February. For more information on the campaign, and to read the Climate Coalition’s latest report, visit fortheloveof.org.uk.

Anthony Anaxagorou’s latest book, Heterogeneous, is available to buy on his website.

← PEARL Hackney Wick, restaurant review: ‘an upstart in a changing neighbourhood’‘You have to look deeper than a Pinterest board’ →