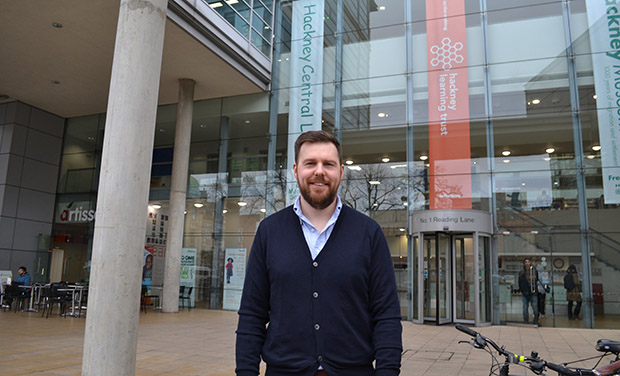 Jon Burke outside Hackney Central Library. He has applied for Arts Council funding for a tutoring scheme for GCSE pupils who use the library service

Someone once said there are two types of frontbench councillor: party hacks who believe in things and party hacks full stop. If that’s true, Labour’s Councillor Jon Burke appears to belong in the former pigeonhole.

In any case, he’s not one of those politically nondescript community figures you could imagine comfortably slotting into whichever party happens to be the dominant one in their particular area. Fittingly for someone whose cabinet brief includes biodiversity, he’s a political animal.

A Scouser and self-avowed municipal socialist who says his hero is Aneurin Bevan – he of the idealistic post-war Attlee government – Cllr Burke wants people to “doorstep” politicians, “harangue them” at meetings and get stuck into the democratic process locally.

“There’s your pitch for the Citizen,” he adds.

Elected to represent Woodberry Down ward in 2014, he is now cabinet member for energy, sustainability and community services, a position he was appointed to by Mayor Philip Glanville, having unsuccessfully stood against him for the Labour mayoral candidacy last year.

“Obviously I quite wanted to be Labour’s mayoral candidate,” Cllr Burke says. “But my personal view is I’ve got the most important job in Hackney, because I think the environment and environmental policymaking is the biggest political challenge of the 21st century.”

A lively contributor to debates in the council chamber, Cllr Burke, who worked as a structural engineer before going into politics, has an unblemished attendance record so could claim to provide decent enough value for the roughly £40,000 he receives in allowance payments from local taxpayers.

What’s more, he’s full of eco-friendly ideas, the most ambitious of which would entail the setting up by the council of a not-for-profit energy company which would purchase electricity from the grid, sell it to customers at the market rate or below and plough the proceeds into local generation schemes and energy conservation.

The council owns around half the roof space in the borough, meaning there is potential for rooftop solar power generation on a relatively large scale.

Panels could one day “blanket” the borough, Cllr Burke suggests, adding: “I think there’s a huge appetite for it locally. I think nationally people are looking for that radical municipal alternative to the status quo.”

He says a council-run not-for-profit power company could provide a “really good offer” for residents, particularly those living in fuel poverty.

“Of course, publicly owned, publicly accountable energy companies have the ability to offer, in effect, some kind of subsidised assistance to some households in a way the big six energy companies are either unwilling or unable to do,” he adds.

“We would be vertically integrated. We’d be generating potentially quite a large amount of electricity [through solar], we’d be insulating our homes better and we’d be addressing fuel poverty.

“In my mind’s eye we’d have a board of people comprised of local residents and elected councillors who would be accountable to the people of this borough and the customers of the company in a way that is simply not the case with the big six energy companies.

“The other point is when we are acquiring energy from the market before we build up capacity ourselves in Hackney we’d also have the option to make a decision around where we acquire our energy from.

“By doing that from as many renewable sources as possible we’d be driving capacity in the rollout of generation elsewhere, because we’re making it more commercially viable, more attractive to investors – so we can be a force for good in terms of energy generation beyond the borders of Hackney.”

All well and good. But if he’s so keen on being green, why isn’t he in the Green party?

“The Green party has in effect existed because we haven’t been able to mainstream environmental policymaking in the way we ought to,” Cllr Burke states.

“I think the Green party is really going to struggle and feel squeezed by the Labour party, which has a renewed and much more radical focus on environmental policymaking.”

While we’re on the subject of all things green, has he noticed how many disposable coffee cups councillors get through at Town Hall meetings? It’s disgraceful! How about issuing them all with reusable cups, perhaps embossed with the Hackney Council “dumbbell” logo?

“I think it’s an excellent point to make,” replies Cllr Burke. “I think it’s one of the things we need to deal with.”

Cllr Burke’s portfolio is very broad (too broad, some might say) and covers libraries and leisure centres too.

With an eye to the possibility of increased educational selection becoming a fact of life under the current government, Cllr Burke has applied for Arts Council funding in a bid to introduce a tutoring service for young people who use libraries as bases from which to revise for exams.

“I want to provide a tutoring service across the broadly agreed five good GCSE subjects,” he says.

One of Cllr Burke’s most eyecatching ideas – that libraries could soon start lending out power tools and kitchen appliances, as reported previously in the Hackney Citizen – would, he says, help cut waste and the cost of living.

But he also claims it could boost social cohesion by bringing together people from different walks of life – in keeping, he says, with the council’s agenda to make Hackney a “place for everyone”.

A place for everyone. What does it mean? Really everyone?

To take a random example, does the council’s ultra-inclusive (impossibly inclusive?) vision mean Cllr Burke might consider reserving an area of London Fields Lido for, say, nude swimmers as part of the remodelling work set to take place there?

“There won’t be a nudist section at London Fields Lido,” Cllr Burke states bluntly. “As novel an idea as that might be, it’s not something that appeals to me.”

So, it’s “Hackney: A place for everyone (except nudists)”.