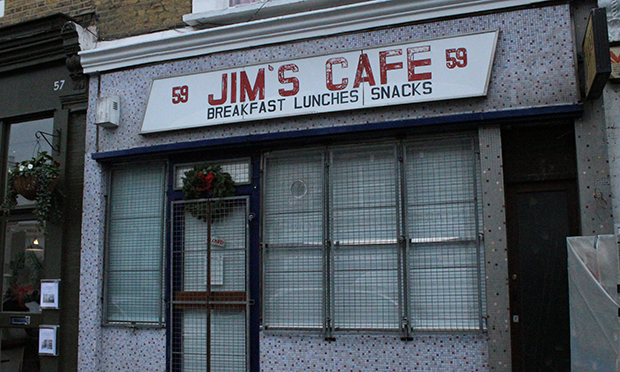 “This is the most hipster place I’ve ever been to – and that’s saying something,” said one of my breakfast companions as we wove our respective buggies past the dimly-lit tables in one of Chatsworth Road’s newest – and oldest – cafes.

The place in question is Jim’s Cafe, now under new management after lying empty for six years. It is the latest in what seems a growing trend to revive ‘old Hackney’, following the new Mermaid pub in Clapton (the original on Mare Street was apparently a haunt of Samuel Pepys) and recent plans to reopen the Castle Cinema, also on Chatsworth Road.

Jim’s was originally an Italian café and ice cream factory in the 1960s. It then became a local caff, where in 2008 the late photographer Colin O’Brien once ate the “best breakfast I have eaten in a long while”. It was so good that he took pictures of the proprietor Dave outside the shop. But on returning with the prints a month later, he was told that Dave had died, and the caff closed its doors soon afterwards.

It is none of my business to speculate what Dave, or indeed Jim, might make of this new incarnation, but for the discerning cafe-goers of Clapton, who were jockeying for room at the bar or ensconced in one of the cosy ’60s-style booths, it is already proving a hit.

I had steeled myself for some disdainful looks in response to us bringing four small children with us, but the polite staff were not to be fazed, leading us from the bustling bar area into a spacious back room with exposed brick work and plants draped from the window ledges.

The breakfast options were all in the region of £10 a head, increasingly the going rate these days. I opted for an eggs benedict-inspired dish that came with sausage patty, grilled tomato and a flood of creamy Hollandaise sauce that left the English muffin somewhat on the soggy side – though the eggs were poached to perfection.

The scrambled eggs with mushroom and Gruyère proved a firm favourite among the group (though this too did not escape the soggy bread syndrome), with a hash brown side made with grated potato that was crisp and eminently shareable.

Where once eyebrows would be raised at the use of sourdough bread, these days a new café needs to imbue fresh life into its breakfast menu to earn its spurs.

A lot of the time Jim’s is up to the task – the smashed avocado on sourdough paired with prawns was a twist I was surprised not to have seen elsewhere, but when a plate of waffles arrived sporting berries, bacon and a fried egg on top, we all agreed this was an innovation too far.

Although living locally I was initially hesitant about Jim’s – a bit too cool for school? –but for all its hipster style there is more than enough substance to match.