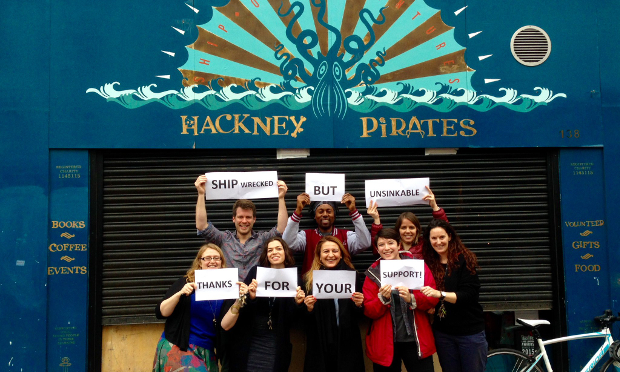 Sailing on: the Hackney Pirates staff thank well-wishers for their support. Photograph: Twitter

The indomitable crew at education charity Hackney Pirates declared themselves “unsinkable” after a BMW ploughed into the front of their Dalston base, called the Ship of Adventures, yesterday afternoon at the same time as flooding chaos hit Stoke Newington.

A man was arrested after the car mounted the pavement and broke through the front of the premises used by the charity, which nurtures young people’s literacy and creativity. No injuries have been reported following the incident

The building houses a cafe and gift shop selling items created by children, as well as meeting spaces and the equivalent of a large maritime-themed classroom which hosts after school activities for young shipmates.

Catriona Maclay, the charity’s founder and chief executive, thanked people for their support, writing on Twitter: “We’re working out what to do next and will update on how you can help soon.”

Hackney Pirates opened its Kingsland Road base in 2014, having previously operated out of premises in Haggerston. The charity was set up around six years ago.

Around eight staff are now employed working directly towards the education aims of the charity, and there are around 300 trained volunteers who give up their time to provide one-to-one attention to the children and help them with reading and writing.

Earlier this year Maclay told the Hackney Citizen around 160 children were expected to attend its activities once a week over the 2016/17 academic year.