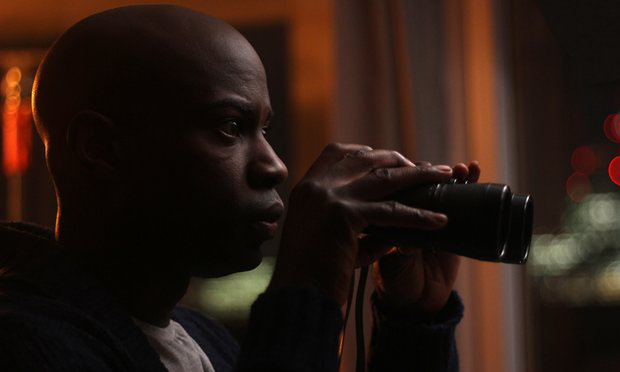 David Gyasi as Deeley in Panic

I meet film director Sean Spencer in a London café that couldn’t be further from the setting of his new film Panic. Warm lights hum and the heating is turned up to full. We sip ginger tea from bone china. There is a dog sitting on an armchair behind us. Someone orders avocado toast.

Panic is set in another world entirely: Deeley (David Gyasi), a music journalist trapped in his high-rise apartment by intense agoraphobia, obsesses over Kem (Yennis Cheung), his beautiful Chinese neighbour. When she is attacked, he must face his fears and the London underworld to find her, armed only with a hammer and his stubborn determination.

It is a fast-paced neo-noir that packs a punch. There is sex. There is fighting. There is even a gun.

But Spencer’s debut feature is in fact much more than just another crime thriller. Shot on North London estates and in and around Dalston, the city is as much a protagonist of Panic as its leading actors. The London here is at once beautiful and barren. It rumbles behind closed windows, it buzzes with neon lights and it echoes along empty streets. Panic’s cityscape is one of ghosts and shadows. It is dark. It is anxious.

Panic is your first feature film, but it doesn’t feel that way. It’s a confident, controlled, restrained piece. How did you manage that?

That’s great to hear. It actually took me quite a long time to get my first feature made.

Before Panic, I had developed three feature films over six years but none of them were made. So in many ways, Panic is the result of quite a lot of failure. At the end of that I’d got to the point where I was desperate to make the leap into the feature space.

And so then by the time I came to actually make it, I had more experience. I had a clearer idea of how to execute it. I think that is possibly why it feels maybe more mature than a lot of debut features.

There is a lot left unsaid and unseen in the film – silences, snippets of conversations, half-glimpsed bodies, reflections, figures cast in shadow – what was the thinking behind this aesthetic?

That was hugely important. What I am always trying to do as a director is leave enough space for the audience to bring their own experience to the film. It just makes it a much richer viewing experience if you can engage with the characters on your own terms.

I still wrestle with whether there is too much exposition in the film about Deeley’s backstory. Would it have been more interesting to know absolutely nothing about why he is where he is when we meet him? Those debates were happening throughout the filming. I think in the end we arrived at a place that doesn’t feel too heavy handed or clichéd.

You’ve said that Panic is a neo-noir. How did you want the film to interact with the genre?

I set out to make a neo-noir that challenged some foundational tropes of the genre. That’s what neo-noir does, that’s why it’s neo, it’s pushing it in a slightly different direction against what the genre started out as being.

As a director, I’m very much into subversion. I tried to subvert audience expectations, especially with the ending where you are left in a place of moral ambiguity. You have to ask yourself how complicit you were as an audience member. Was this guy good or just incredibly messed up? Interestingly, some people actually read the ending as quite optimistic.

I like making films that can be read on a few different levels and that was very much on my mind. At every stage of production, we tried to stay in that intellectual space where we were trying not to do the obvious thing.

There’s a gritty reality to the film, but visually it’s crafted like a piece of art. How did you strike a balance between these two aspects?

It’s great the way the film has sparked a level of debate about real aspects of London that just don’t get seen or spoken about: the ghost economy, people trafficking, sex trafficking. This stuff is happening a few doors down from wherever we are as we go through our daily lives.

But the style of the film is not typical of the genre. At the forefront of my mind from the very beginning was finding a visual grammar that felt fresh and unique when shooting one of the most photographed cities of the world. It was a real challenge.

Art and photography were big influences. I’m a huge fan of a Japanese photographer Daidō Moriyama, I really like his framing. Also Caravaggio and the chiaroscuro effect. We looked for influences that were not immediately identifiable as noir. It’s given the film that balance between feeling really real, but also stylistically heightened.

Deeley is not your typical hero. Did you set out to portray a kind of vulnerable masculinity that is rarely given screen time?

A big part of what I wanted to explore in the film was mental health and loneliness in cities. That was very deliberate. I wanted to show a kind of masculinity that is not often seen on film. That was what a big part of what attracted our lead David Gyasi to the role of Deeley. Up until that point he hadn’t had the chance to play a character with that kind of complexity.

It still feels like there’s a lack of complex roles for young black actors that don’t fall back on hackneyed stereotypes. How did this influence your writing and casting?

I didn’t have an actor in mind when I wrote it but this definitely came to my mind when I was casting David. We are often presented with very specific versions of black masculinity that are not necessarily three dimensional. By casting David in the role I knew it would add a layer to the character of Deeley that I think is important to see on film. Young black characters very rarely get to show vulnerability, it doesn’t feel real to me and I don’t think it feels real to a lot of people. I’m glad that that aspect of the film is resonating with those who choose to engage with it. Not everybody does.

What about women? Voyeurism, obsession and stalking are key features of the film. Does the genre need to adapt for a feminist audience who want to see women as more than the femme fatale?

Typically, in neo-noir, the female roles are very strong and that’s what is interesting about the genre. And so I wouldn’t say that actresses have been underserved by the genre. But have they been underserved by this film? We don’t have a typical femme fatale in Panic. I did try to portray Amy as a female character that had some consequence, who had layers and levels. I wanted to make her a real fleshy, messy character. I tried to give her some agency. But I can definitely see the argument for stronger female roles.

Where can people see Panic?

Our next public screening is 12 December at Stratford Picturehouse. Then the film will be playing at The Bernie Grants Arts Centre until January 2017. It’s also available to stream on multiple platforms at http://panic-movie.com/.