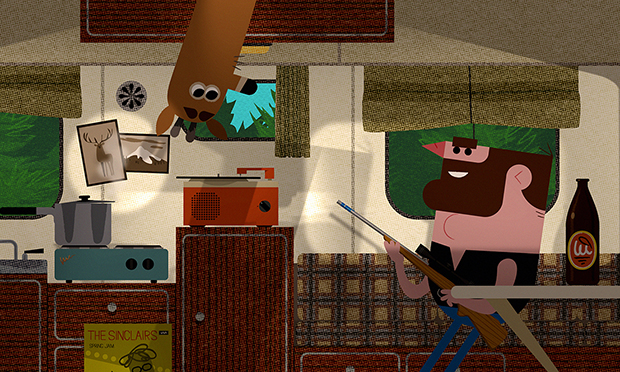 Away from the latest Pixar blockbuster, the world of independent animation is quietly thriving.

From the use of paint on glass, to cut-outs, puppets and collage, animators are finding ever more diverse and experimental ways to go about their craft.

The London International Animation Festival (LIAF), at the Barbican this month, seeks to demonstrate the growing medley of styles, materials, techniques and productions used by today’s animators.

The 10-day festival will feature 200 new, archive and retrospective animated shorts and features from across the world, alongside a feast of forums and talks.

The opening gala will celebrate a titan of British animation Chris Shepherd, whose work fuses comedy with commentary on the darker side of human nature.

Shepherd’s new live-action/animated short film Johnno’s Dead will be premiered, with the man himself in attendance to discuss the making of the film.

Canadian animator Ann Marie Fleming will also be at the festival, for a screen talk following the premiere of her animated feature Window Horses.

The film is about a young Canadian poet called Rosie who undergoes a life-changing experience in Iran, and integrates different animation styles to express what transpires there in a tale of art, history, and family.

There will also be a rare chance to see Japan’s first Anime feature, Momotaro – Sacred Sailors, a lost masterpiece from 1945 that has now been fully restored from the original 35mm negatives.

Other Archive screenings include classic Disney shorts from the 30s and 40s featuring Mickey Mouse, Donald Duck and Goofy, characters who define the history of animation and have survived to this day.

More than 2,400 new films were submitted for the festival, and 128 of the best have been selected to screen across nine categories including British Showcase, Into The Dark – Scary Shorts and New Japanese Shorts – Beyond Anime. There will also be two programmes catered for children.

LIAF ends with a rerun of all the festival’s best bits, chosen by a panel of industry judges and voted for by audience members.