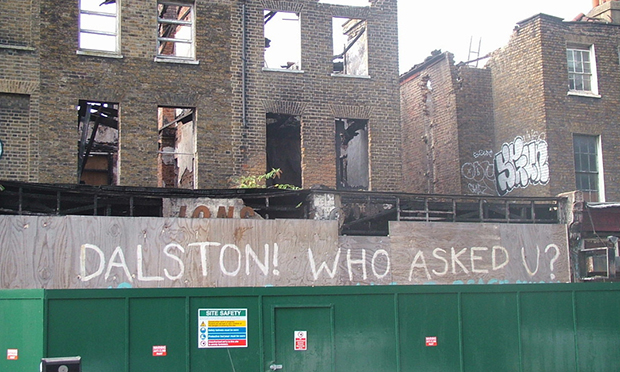 Boarded up: 62-64 Dalston Lane after the houses were gutted by fire

A group of Georgian terraced houses on Dalston Lane will soon be consigned to history with demolition set to start on the remaining properties.

Campaigners have battled for over a decade to save the 16 houses, which are thought to date back to 1807.

But hoardings were put up last month around the remaining structures in preparation for the wrecking ball.

The local businesses that once graced the terraced houses are now long gone.

A council spokesperson said the demolition is likely to be complete by the end of January.

In place of Georgian houses, Dalston residents can look forward to 44 new flats and retail units with the street frontages built in “heritage likeness”, without any affordable housing, which according to the council would have made the scheme financially unviable.

Bill Parry-Davies of the OPEN Dalston environmental campaign group has written extensively about the controversial demise of the Georgian terraced houses on opendalston.net.

For him, the council’s treatment of these rare heritage assets over the past 30 years is nothing less than “sickening and unforgivable”.

Last month the final remaining tenants, musical instrument shop Sound and Music, were packing up and moving out.

Unlike most of the businesses that were on that stretch, Sound and Music has been offered a “secure lease with a good rent discount” in one of the new council-leased redeveloped Dalston Lane shops.

Shopkeeper John Wearn started the family business with his brother Mike over 30 years ago.

“The last 10 years have taken a terrible toll,” he told the Hackney Citizen. 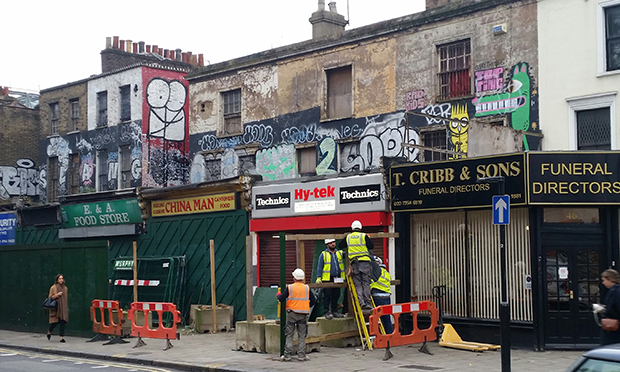 But the demise of these heritage assets is a story that goes back further still.

Those who can remember Hackney in 1982 will recall 48-76 Dalston Lane as home to a diverse cluster of local businesses, including restaurants, a tailor, a florist and a bakery.

But that year Hackney Council acquired the 16 houses from the abolished Greater London Council (GLC). By 1990 most of the businesses’ leases had expired – with requests to renew them turned down by the council.

As the houses became vacant they were boarded up and as businesses moved out so squatters moved in.

In 2002, two decades after the properties had transferred to Hackney Council, only five remained occupied, with some of the premises uninhabitable through lack of maintenance.

By then the council was in debt to the tune of £70 million. To get out of its financial hole it proposed to sell off assets, including the Georgian houses.

The houses were advertised to be sold separately at auction, and it is understood that several tenants made private offers in excess of the auction guide price.

But at the auction they were offered as one lot, and were sold over the heads of the tenants to Dalston Lane Investments Limited, an off-shore company in the Bahamas, for £1.8 million.

Author and poet Michael Rosen has slammed the neglect and sell off of the houses, calling it “a scandalous story of neglect for the built environment and contempt for Hackney people.”

Over the next decade, this “scandalous story” continued, with a spate of suspicious fires burning down some of the houses. as well as an ill-fated campaign to restore them.

Shortly after acquiring the properties, the new landlord, whose exact identity remains nebulous, served notice to terminate the tenancies.

Then in 2004 the landlord applied to demolish the houses and fling up 28 flats and retail units.

The council rejected the application on the grounds that the proposed scheme would lead to a loss of local character and offered no affordable housing. 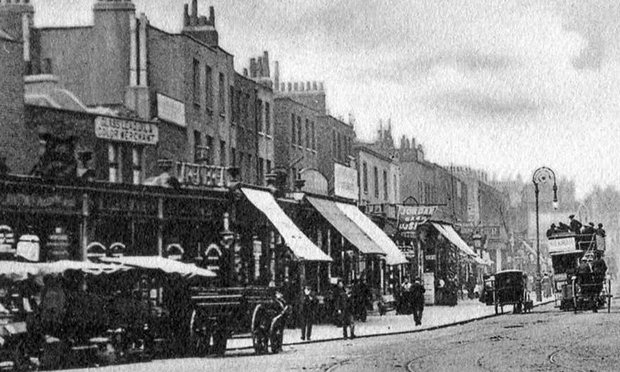 At the same time there was a move to for the houses’ historic value to be fully recognised. English Heritage reported in August 2004 that the houses made “a valuable contribution” to the area.

“That bolstered the case for retention,” writes the author Iain Sinclair in his book Hackney, That Rose-Red Empire. “But once buildings start burning down that diminishes historic interest very effectively.”

The first fire broke out in July that year, gutting the vacant building next to Star Bakery, which was facing possession proceedings.

A couple of months later a squatter in Jon’s Scooters at 62-64 Dalston Lane reportedly received a visit from someone warning him to leave the building. A few days later he had to jump from a first floor window to escape the fire that gutted the houses.

By May 2005 there had been eight fires at sites on which applications for redevelopment had been made.

“There hadn’t, before this, been a fire on Dalston Lane within living memory,” Sinclair observes.

Hackney Council made the houses part of the Dalston Lane (West) Conservation Area in January 2005 and that same year English Heritage declared them “remarkable survivors of Georgian architecture.”

But noises made about preserving the houses were not followed through.

Campaigners from OPEN Dalston were assured that refurbishment would begin by April 2007 after they started a petition and made a deputation to the council. That deadline passed, and on 10 September 2007, nearly three years after the conservation area had been declared, Hackney Today heralded the start of a conservation project to preserve and enhance the terraced houses.

Cllr Guy Nicholson was quoted as saying: “The council is committed to enhancing Hackney’s built heritage and using conservation policy to bring this about.” In the same month the council used public money to demolish the shelled out remains of 60, 62 and 64 Dalston Lane.

Fast forward another three years to 2010, and Hackney Council bought back the remaining houses as well as the three demolished sites for £3.8 million, which was more than double what it had sold them for at auction.

In October 2012, the council granted itself planning permission to redevelop 48-76 Dalston Lane.

The permission would see the rear of the houses demolished so as to convert the upper floors into 44 flats.

Crucially, the conditions for the permission included the renovation of the existing Dalston Lane facades and shop fronts.

But on 27 June 2013 the council entered a development agreement with private contractor Murphy, who proposed complete demolition rather than restoration or retention of the houses.

Under the agreement, Murphy were to be granted a 125-year lease said to be worth £2.38 million, and would sell the new flats privately, with no affordable housing. The ground floor shops would be leased back to the council.

Demolition was about to begin in January 2014 but was halted when OPEN Dalston campaigners intervened, pointing out that Murphy’s structural report, which recommended the demolition, did not override the original planning conditions, which would have seen some of the original facades retained.

At that time the council was also in possession of a report by independent expert Alan Baxter LLP, which it had commissioned and was dated October 2013.

The report in part challenges Murphy’s claim that the Georgian houses in their present state were irredeemable.

It found that some of the facades “which are in less degraded condition have some potential to be repaired, and it might be possible to do so without significant intervention and cost.”

Campaigners had been granted a reprieve, but it proved a temporary one, as Murphy put in a new application to “demolish and rebuild” the houses.

During the public consultation the council received 785 written objections from local residents, such as Dalston architect Lisa Shell, as well as The Hackney Society, the Spitalfields Historic Buildings Trust and Society for the Protection of Ancient Buildings.

On 5 March Hackney Council’s planning committee gathered to decide on the application. The vote was tied, and with the committee split its Chair, Cllr Vincent Stops, used his casting vote to approve demolition of the 13 remaining houses.

Last throw of the dice

Down but not out, OPEN Dalston appealed to residents to help fund a legal challenge of the decision and initiate judicial review proceedings.

Their argument, which was supported by the October 2013 report by Alan Baxter LLP, as well as another, by conservation engineers Morton Partnership, was that demolition of the Georgian facades could only be considered ‘inevitable’ because Murphy’s designs were for open plan shops. The council, the campaigners said, had failed to ask what design changes were needed to save the houses.

But granted their day in court in November 2014, a High Court judge dismissed OPEN Dalston’s claim, ruling that it was not for the court to substitute its view for Hackney Council’s as to which of the engineer’s opinions was to be preferred.

“OPEN has lost a Court case but it is Hackney’s citizens and future generations who have ultimately lost out and sadly that is irreversible,” Parry-Davies said following the defeat.

After a judge turned down OPEN Dalston’s request to appeal the judicial review decision in January 2015, campaigners and residents, sensing the battle was finally lost, held a ‘wake’ beside the boarded up houses.

Reflecting on the whole saga as diggers move in to flatten the remaining houses, Bill Parry-Davies said:

“Having inherited these heritage assets for free, when the old GLC was abolished, Hackney let them run to ruin by disgraceful neglect.

“They refused to sell to their shopkeepers and family businesses were then driven out. They disregarded their own independent consultant’s advice on restoration and their own conservation and affordable housing policies. They disregarded our community’s views. They even tried to demolish them without planning permission.

“This calamitous tale has cost the public millions. Now, having destroyed our heritage, there will not even be any affordable housing behind the phony fronts – no public benefit at all.