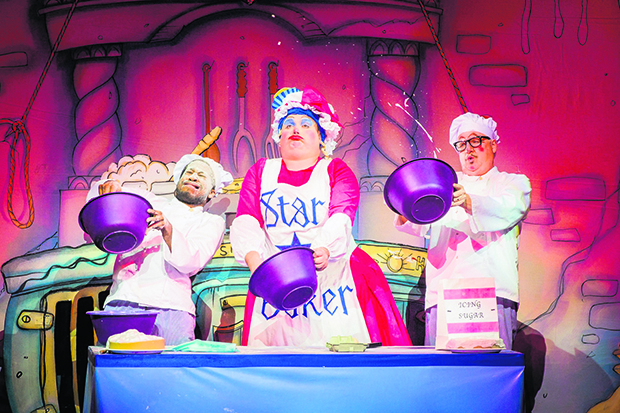 December has arrived, and with it, panto season, which this year welcomes Sleeping Beauty to the Hackney Empire. The press night may have been on the first of the month, but the audience was already in the festive spirit and the show did not disappoint.

Set in enchanted Hackneytonia, the classic story has been brought up to date by Susie McKenna’s stellar writing and direction, and by Steve Edis’ fabulous score. After being cursed at birth by the Dark Fairy Carabosse (Sharon D. Clarke), Princess Tahlia (Alexia Khadime) pricks her finger on the “only spinning wheel not lost to gentrification” and falls asleep for a hundred years, her only hope of rescue coming from the promise of a kiss.

However, this is a fairy tale for the feminist age and our Princess is no damsel in distress. She fights dragons, refuses marriage and sings a cover of Beyonce’s anthem ‘Freedom’. Less Sleeping Beauty and more Xena, Warrior Princess, in the end it is Tahlia who must save the day, swapping her ball gown for a suit of armour and sword in order to rescue Prince Gabriel (Wayne Perrey) from Carabosse’s lair. Even the magic kiss which breaks the evil fairy’s curse is cleverly reworked in the name of female pantomime empowerment.

In keeping with these clever plot twists, it is the leading ladies who really steal the show. Khadime’s voice is so magnificent that you will want the crowd to stop shouting every time she opens her mouth to sing. Clarke, with her mellifluous West Indian accent, leather dress and huge black feather wings, is equal parts terrifying and sexy. Like those of Princess Tahlia, her numbers are so good you will forget that you are supposed to boo and hiss and find yourself cheering along instead.

2016 has provided McKenna with ample fodder for some withering political pantomime commentary. The Trump joke is a winner with the crowd, as are the not-so-veiled criticisms of Brexit. (The show features a song entitled “Never ask the people what they think”, at one point the Dame dons a dress that is half Union Jack, half European Union flag, and the story culminates in the granting of free movement to all magical creatures.)

But even if you don’t watch the news, or are simply sick of it, there is enough classic panto joy in the show to leave you satisfied. The Dame (Gavin Spokes) is as flirtatious as ever, the front row faces the barrel of a water pistol and the cast lead the audience in a sing-a-long, howling and roaring along with the dragons and wolves on stage. We all shout “she’s behind you” once or twice, and feel warm and Christmassy inside when we do.

It may have been the interval wine, but it feels as though the performance really comes into its own in the second half when a giant ogre, a puppeteered forest of thorns, and a fearsome, red-eyed dragon take to the stage. This is undoubtedly an amazingly well-designed show and the theatrics will make you stop shouting and simply stare on more than one occasion.

Packed full of Bake Off gags, Boris Johnson jokes and pop songs panto-fied, this is a production for anyone in need of a pick-me-up at the end of a long year.

But don’t take my word for it. A much more qualified, discerning reviewer sat in the seat directly in front of me. She may have been only four years old, brandishing a flashing wand and an orange Capri-Sun, but this was a customer who knew exactly what she wanted from a panto. She booed, she cheered, she stood on her seat and waved her hands in the air. She laughed with gusto at jokes she can’t have possibly understood and she squealed with a delight that felt contagious in the crowd. She was, all in all, a model member of the pantomime audience, and we followed her lead as our standing ovation turned into an impromptu auditorium dance-off.