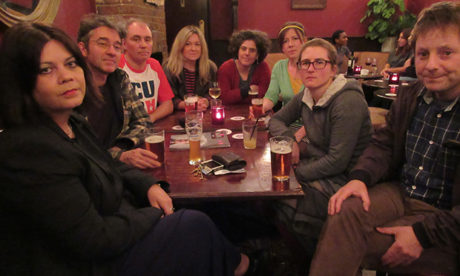 Mehetabel Road residents at the Chesham Arms pub, where they met to discuss the problems

Hackney Walk has come under fire from angry neighbours who face “horrendous” alarms going off during the night, lights being left on in shops and “endless pop-up parties”.

The luxury fashion hub launched earlier this year with retailers such as Nike and Bally moving into the reclaimed railway arches between Homerton and Hackney Central stations.

Mehetabel Road residents, whose gardens back onto the arches, say they are “frustrated” after promises made by developers have been broken and “no action has been taken” to fix a variety of problems.

Donna Molloy, who lives on the side of the street adjacent to the arches, said: “One issue that has driven us all to distraction is alarms going off at random hours of the day and night.

“They seem to have a bizarre system where all the alarms are at the back, near our gardens, so the security guards at the front of Hackney Walk can’t hear them. They wouldn’t know if there was a fire or a burglary.”

“Even when we go round at three o’clock in the morning, as we have done regularly because we want to get some sleep, the guards don’t actually have access to the outlets to switch the alarms off. They have to get the key-holder for the outlet to come from wherever they live to turn it off, which can take hours.

“It went off at 3am in the early hours of Sunday last week. Residents went to see them at 6am to say the alarms were driving them mad, but they didn’t manage to switch them off until 11am, which is when the shops open anyway.

“When they go off, they stay on all night. No-one can sleep. I had my mum staying in the back room the other day and she was awake all night. And that’s just the latest in a long series of problems.”

Molloy said residents have had to deal with various issues in the past year, including a “horrible, mechanical noise” coming from shops’ air conditioning units during the summer. 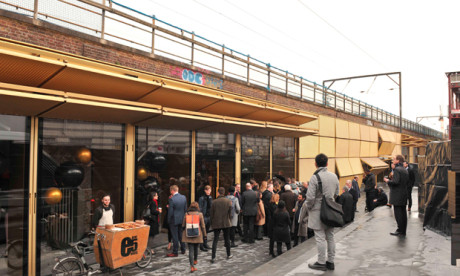 She added: “It got to the extent that you couldn’t use your garden. Those of us that work at home could hear it through the windows, even when they were closed. It was really unpleasant.”

Delivery trucks are understood to have been using Mehetabel Road despite assurances it wouldn’t happen, and Molloy said “awful neon lights” left on in the shops are disturbing residents at night.

The group has now taken to Twitter, coining the hashtag #fashionhubfail to raise awareness about the problems.

With Hackney Walk developers soon to submit a planning application for its ‘second phase’, Molloy called on them to “get all their ducks lined up, keep their promises and be considerate neighbours first”.

She added: “We complain to the council and to Hackney Walk and send them loads of emails, but all we get are responses asking for meetings about setting up other meetings, but no action. They’ve both dragged their feet.”

A spokesperson for Hackney Walk said: “We are very concerned about any disturbance that may have been caused to our neighbours and are working hard with our landlord and tenants and will continue close dialogue with the local community to ensure these issues are resolved as soon as possible.”

Hackney Council was contacted for comment but had not responded by time of publication.