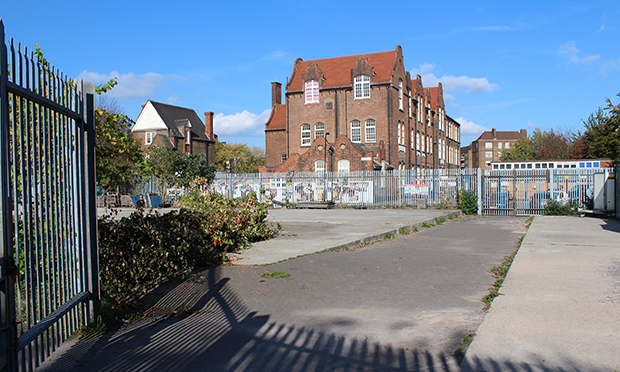 Campaigners fighting plans described as a “stealthy land grab” have come up with an alternative vision for a disputed patch of ground currently home to a community garden and storage area for BMXs.

Haggerston Park User Group (HPUG) is seeking planning permission from Hackney Council to implement its proposals for a BMX track and nature reserve with food growing planters on the land off Audrey Street.

But the council’s planning committee is set to decide tonight whether to grant permission for a separate scheme that would involve creating temporary school premises on the site for use by the City of London Academy.

Currently used as a depot, the disputed territory is tarmacked over and ringed by imposing metal fences.

It was once part of Haggerston Park, however, and campaigners say the Town Hall’s plans are tantamount to “sacrificing” historic green space which, once swallowed up by a school, is unlikely ever to be restored to its more natural form.

The chronic strain on school places in the borough and projected future demand for them means the council must allow new schools to be built fast, Hackney’s mayor Philip Glanville has indicated.

The Town Hall wants the Audrey Street site to be used by the City of London Academy temporarily while it seeks planning permission from the government to build two new permanent secondary schools nearby.

According to the council, the site would be returned to public use in 2022. However, pressure group Save Haggerston Park says it doubts this will come to pass.

Land just off Shoreditch Park, currently occupied by the under threat Britannia Leisure Centre, is likely to become the permanent home of one of the new schools – a prospect that itself has drawn the ire of amenity groups.

The leisure centre is officially earmarked for redevelopment, and it is thought likely it will be knocked down – even though it was recently given an expensive £300,000 revamp.

The council says this job was funded by contractor Greenwich Leisure Limited as part of its contract and was “necessary to maintain the standards expected by customers”.

An HPUG spokesman said: “We sympathise with Hackney trying to do the best for kids’ education, but putting them in portakabins, on a tiny site, on a dead end street [Audrey Street], with no playground, is a recipe for disaster.”

They added that “sacrificing scarce parkland” was “something every local resident should oppose.”

Hackney Council has said the disputed land comprises little more than two per cent of the total area of Haggerston Park.

The council says its plans will assist in providing the 1,650 additional secondary school places needed in Hackney by 2021.

← Council apologises to Dalston resident Jacqueline Kent for delays in fixing mould hellBritannia Leisure Centre given £300,000 refit – despite plans to knock it down →