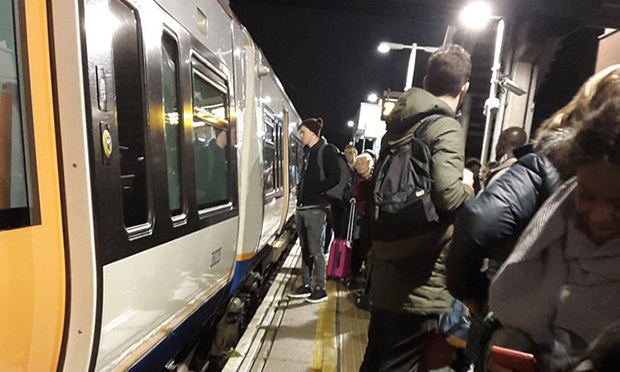 Aftermath: passengers wait after being forced to evacuate the train. Photograph: @AnaBilciu

Frightened passengers scrambled to escape from an Overground train after a lit firework was thrown into a carriage full of people yesterday evening (6 November).

The rocket was hurled in just as the doors were about to close at Hackney Central station.

Brayan Chasla, who was in the carriage, said: “I was on the way home from Stratford with my mum and sister and I suddenly heard a voice shouting ‘Fire! Everyone get off!’

“I thought I was going to die. I thought it was a bomb or someone with a gun who wanted to kill people. My sister was next to me so I covered her, and I saw my mum crying on the floor.

“It was very scary.”

@cembishop Today was the biggest shock of my life when I was coming home at Hackney Station. Someone lighted a firework inside the train.

Chasla described the chaos as passengers tried to flee: “A woman who had just had an operation panicked and became ill, and many people lost their bags under the train.

“Then we heard someone saying ‘Don’t worry, everything’s okay’ and the atmosphere calmed down, but everyone was still very nervous.”

Some dumb just lit a fire cracker on the overground at Hackney Central and got peeps running for their lives.

He said the damage could have been a lot worse had the firework gone off properly.

“I saw a man step on the rocket to stop it exploding and I think it worked. Police found the firework later and it was big, but it looked like it hadn’t worked as intended.”

just had a bomb scare on the overground in Hackney. closest I’ve thought I was to dying. someone threw a firework

As for the culprits, Chasla said they are “not right in the head”.

He added: “Fireworks should be banned unless you have a licence. You cannot buy cigarettes if you are over 18, but it seems to be too easy for youngsters to get hold of fireworks.”

A British Transport Police spokesperson said: “We were called to Hackney Central station around 6.40pm on Sunday 6 November following reports that a firework was thrown in a carriage.

“Enquiries are underway to identify who is responsible and officers are appealing to any passengers who witnessed the incident to get in touch.