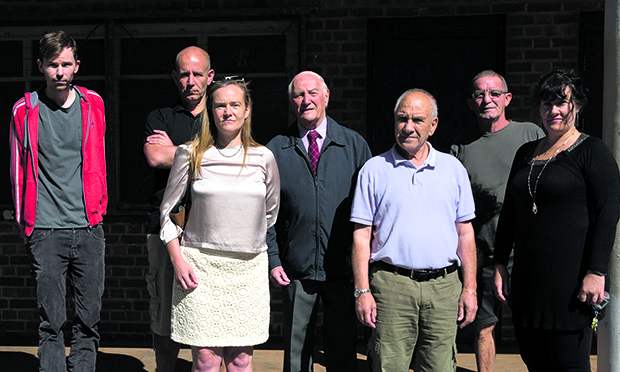 Unhappy: Morland estate residents fought against the sale of the land in 2013

The war over a patch of land that was once part of Morland Estate has been reignited after residents claimed they are being “sidelined” by both the council and a developer who wants to turn it into flats.

A fierce battle erupted in 2013 when the council sold the land at auction for £457,000 despite protests from residents, who argued it could have been used for allotments or bicycle parking.

But Julian Blake, chair of Morland Estate’s Tenants and Residents Association (TRA), said: “The proposed design of the block is far bigger and taller than the single dwelling house used as the basis of the council’s valuation of the land at £180,000 before its 2013 sale.

“Residents on the estate are worried about the height of the new proposal and the loss of privacy and daylight by immediate neighbours and the impact of the plan on what is a conservation zone.

According to Blake, residents are “very unhappy” about the way the consultation process has been handled.

In a letter seen by the Hackney Citizen, the developer seems to have become aware of opposition to the sale of the land in 2013 and, knowing that residents were likely to oppose any plans for the site, decided to go straight to the planning authority for advice.

Blake said: “This means that the developer and the council have made a conscious decision to sidestep direct discussions with residents knowing full well that we would have concerns.

“If you know people have concerns, the best thing to do is talk to them rather than avoid them. It has left a lot of people very unhappy and it is certainly not in keeping with the boasts in the planning documents of a ‘consultative approach’.”

The TRA previously complained that the council’s list of consultees was “flawed”.

Blake said: “We wrote to the council’s planning team and to the developer asking for the consultation period to be extended briefly so that residents could talk to the developer directly about the scheme, and because the council had failed to notify many immediate neighbours, but the request was denied.”

A spokesperson for Hackney Council said: “The consultation was carried out correctly – 123 letters were sent out and notices were placed on site and in the Hackney Today newspaper.

“The TRA was not informed because it is not a recognised consultee. A letter was sent to the chair of the TRA because he is a neighbour but he did not respond. Relevant neighbours can still respond until 7 November and any concerns will be taken into consideration.

“The assessment of the application has not yet taken place.”

Stephen Chance of London Fields West LLP said: “The proposal is to build three new homes on the long-derelict site. The building will be about the height of a typical four-storey Georgian town house although with the silhouette reduced by stepping down in landscaped terraces.

“The consultation process is a typical process in which pre-application meetings were held to discuss the kinds of proposals that would be acceptable on the advice of planners and others present in the meetings.

“We then submitted the application and wrote to neighbours to notify them that the council would be consulting them in the normal way, and also that we would be willing to meet to explain the proposals.

“In this way, the application would be available for consideration on its merits independent of any issues residents might have had about Hackney Council’s previous decision to sell the land.

“The site is located on the very edge of the conservation area, in an area of mixed building types and heights, and the council’s procedures are being followed as regards consultation on conservation matters.

“Any concerns about possible loss of privacy or daylight have been addressed in the detailed application and the relevant technical reports.”

← Pay all staff at least London Living Wage, urges Mayor of HackneyExhibition shows how the teenage bedroom is ‘a world of its own’ →