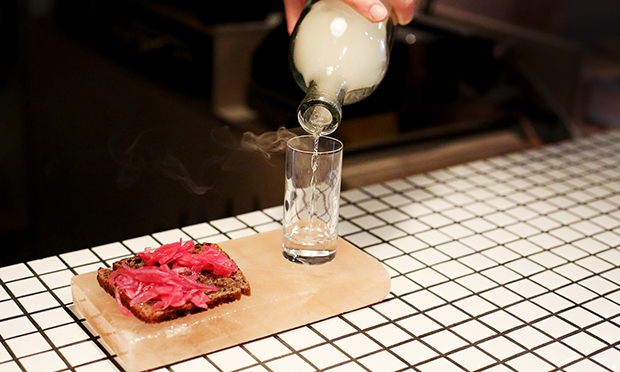 Great cocktails: A Pousse-Café, served at Behind This Wall. Photograph: Alex Zalewska

No, it’s not behind any wall. It’s down some stairs and if it’s behind anything, it’s velvet curtains. Other than its name, though, guests are unlikely to quibble with there being a new bar on the Narrow Way.

Alex Harris opened Behind This Wall (previously used as storage for a local Turkish social club) back in February after many years working in food and drink for the Soho House group.

He is a London lad who grew up in Baltimore and returned to the capital to settle in Bethnal Green. The East Coast connection pops up on the menu in a few places (Vermont whiskey and cheddar, oysters, Providence Martinis) but the atmosphere in his bar is otherwise pure Hackney.

The cocktails are great. The aforementioned Providence Martini is delicious, served wet (lots of delicious vermouth) rather than knock-out boozy. It’s also a clever serve – garnished with a homemade ‘olive’ of cranberry and lime juice, so at the end of the drink there’s a pop of flavours from a Cosmopolitan. Sweet rum-and-coffee-based Salem Witch Reviver is smooth and all too drinkable but the pride of the menu is a short, fat, icy Manhattan, snazzed up with smoke, Pisco and herbal bitters.

For a more unusual drink, try the pousse-cafés: shot-sized drinks served with a nibble, traditionally served at the end of a meal after coffee when you just want to draw your lovely dinner out a little bit longer. Beer drinkers get four taps of local ales (Beavertown, Five Points, Redchurch) and the whisky menu has nice Scotch (Glenmorangie, Bruichladdich) as well as ryes and bourbon.

Best of all, non-drinkers get special treatment here in a way that other bars overlook: there are Square Root sodas (made in the arches on Amhurst Road) or lemon sea foam and soda, which will have fellow drinkers peering over their rims at.

Oysters (£1 each during happy hour) and poke bowls fill most of the bar snacks section of the menu, with nice alternatives for anyone not feeling raw shellfish. Lime pickles on rye bread could have sat on a little smear of butter but the nibbles of cheddar (served with sticky little maple-candied blueberries) were spot on. That said, you’ve got to question the wisdom of serving snacks on a plate literally made of salt, however cool it looks.