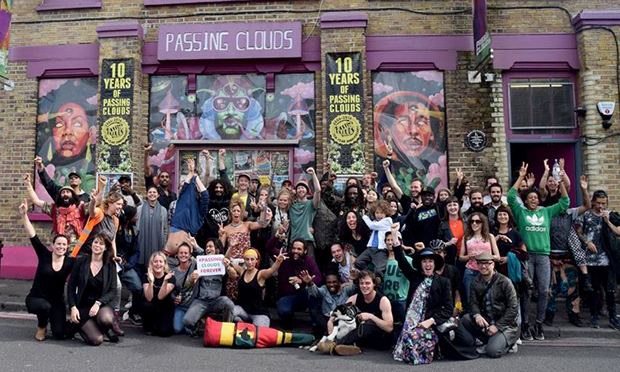 Dalston hippy base Passing Clouds has officially been named an Asset of Community Value (ACV) in a move that could hand its supporters a vital lifeline in their campaign to reopen it.

However, it remains to be seen what this designation will actually mean in practice since the building that the venue had occupied on Richmond Road for around a decade was seized by bailiffs acting on behalf of its owners Landlord Developments several months ago.

Currently, Passing Clouds does not exist in any permanent physical location in Hackney or elsewhere, and its boss, Eleanor Wilson, has said she is involved in court proceedings to try and stop the redevelopment of its former home.

If a landowner wants to sell a property that has ACV status, they must tell the council. If a community group wants to buy the asset, they can then trigger a six month moratorium to give them a chance to prepare a bid for it under what is known as “community right to bid”.

During this period, the owner cannot sell their property on the open market.

A building’s ACV status can also be a reason for councils to turn down planning applications by developers, though in practice this is difficult, and the designation could also potentially allow Hackney Council to compulsorily purchase the site. However, the Town Hall has said this course of action is not currently being considered.

At last night’s council meeting Councillor Guy Nicholson confirmed that an application was made for Passing Clouds to obtain ACV status.

“Interested parties” now had the “breathing space” to try and find the money to acquire the freehold from the current owners, he added.

Alan Miller from the Night Time Industries Association said: “It’s fantastic news that Passing Clouds has achieved Asset of Community Value status. It is an important venue and cultural hub locally and for London.

“We very much hope that a speedy resolution can be reached with the landlords to ensure that the ongoing contribution of Passing Clouds can continue.

“There needs to be more opportunity for venue operators to own their premises to avoid these issues in the future.

“That’s why we have the national campaign to #SaveNightLife which we ask the public to sign.”

Council: ‘We’re not about to buy it’

Cllr Nicholson said: “It is the role of the council, obviously, to determine whether or not any venue in the borough, should they receive such an application, can actually take on that designation –and Passing Clouds has, indeed, recently made an application.

“This does not mean that the council is about to buy the building in which the venue is located.

“But what it does do is it enables time for the interested parties who wish to see the current use continue to perhaps find the capital to acquire the freehold from the current owner, and it just gives valuable breathing space for that to take place.”

Mayor of Hackney Philip Glanville had earlier said he hopes the decision will send a “strong message” about the cultural value of live music venues locally.

He said: “Passing Clouds was a unique venue with an exciting, creative yet community feel to it. In many ways it has become a victim of its own success; venues like it were the catalyst for the resurgence of Dalston’s night life, which has made the area such a profitable place for developers.

“Sadly this doesn’t mean that it will be able to reopen immediately – ACV-status only offers groups the opportunity to express an interest in buying a property if the owner plans to sell it – but I hope it serves as a boost to the campaigners and sends out a message to the owners of the building that this venue and the community that developed around it is important and should be considered in any future plans.”

In September a judge upheld an eviction order against Passing Clouds, and a subsequent march in support of the venue was attended by hundreds of people.

Homerton pub Chesham Arms was saved in 2014 – in part because it had gained ACV status.