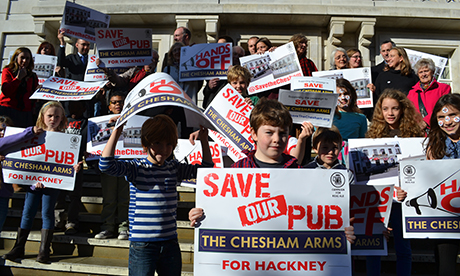 Campaigners bidding to save an historic neighbourhood pub are celebrating after a judge ruled in their favour at a packed Town Hall hearing today.

The Chesham Arms was given protected status when Hackney Council listed it as an Asset of Community Value (ACV) earlier this year, but its owner Mukund Patel wants to convert the building into flats and challenged the awarding of ACV status at a tribunal hearing.

Mr Patel’s lawyer Tony Allen argued that the listing contravened his client’s property rights and claimed the building was not financially viable as a pub.

But James Watson of the Churchwell Residents’ Group said the pub in Mehetabel Road, Homerton, had “intangible intrinsic value”, adding: “It doesn’t have a monetary price tag – the real value is what it stands for in the community”.

He said he knew of 18 separate expressions of interest by private sector organisations wanting to restore the pub, adding: “We estimate that Mr Patel has lost at least £40,000 over the year as a result of keeping the pub closed.

“He must come to the realisation that the land is only worth its current valuation as a public house until and unless development potential exists. We maintain that no such potential exists.”

Fellow Churchwell Residents’ Group representative Martyn Williams said there was no evidence the pub had not been financially viable.

Judge Nicholas Warren dismissed the appeal by Mr Patel and said he would outline his reasoning in writing within three weeks.