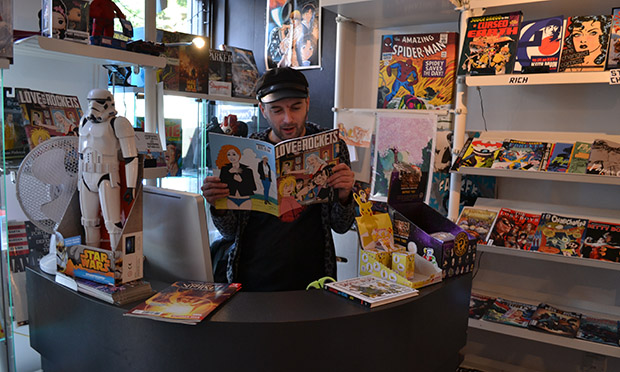 The plummeting value of the pound has claimed another casualty – Clapton comics shop Raygun East.

Its manager Nevs Coleman told the Hackney Citizen the shop would be closing this weekend and said the Brexit vote was the biggest single cause as it meant the business was now paying more for imports from overseas.

However, he pledged he and colleagues would not abandon the borough and leave it victim to a comics drought, vowing: “We will definitely maintain a presence, no matter how grassroots. Even if it’s just literally us with a bunch of comics and a shopping trolley in Clapton Square, we’ll be doing it.”

The shop, an offshoot of Raygun in Richmond, was established two years ago. It prides itself on its stock of lesser known works and the superior knowledge of its sales staff.

Coleman, who has been working in comics retail for two decades, said: “The only thing we were ever interested in was creating a space where people could come in, hang out, chat about comics and be introduced to things that they might not have heard about.

“The mainstream of comics is very vanilla and very corporate and very PR driven. There’s a whole history of comics that exists outside the mainstream that hasn’t been explored very much – certainly not in London shops while I’ve been around.

“All the shops that did that have either moved on or they’ve folded.”

He added: “There’s the work of Brendan McCarthy, Jaime and Gilbert Hernandez, Alison Bechdel – a whole myriad of people who, because they didn’t do Spider-Man or Batman, just didn’t get recognised. We were very much about saying, well, this is worth bothering about.”

Publishers and the shop’s loyal customers reacted emotionally to its swansong.

“Yesterday was our last new comics day in this venue,” Coleman told the Hackney Citizen. “We had people say to us, I’m coming in to pick up my new comics but I wanted to tell you how much this place means to me.

“Unfortunately there was an industrial digger ripping up the pavement outside, so all those testimonies were punctuated by: ‘NNNNRRRrrr’.”

Ludo Pujol, an illustrator whose work has been published in fanzines as well as national and local newspapers, including the Hackney Citizen, said: “It’s about diversity. Without shops like this, you only have the narrative from the mainstream and you lose the personal touch, and the process to getting published, if you are starting out, becomes almost impossible.”

This Saturday will be Raygun East’s last day of trading.