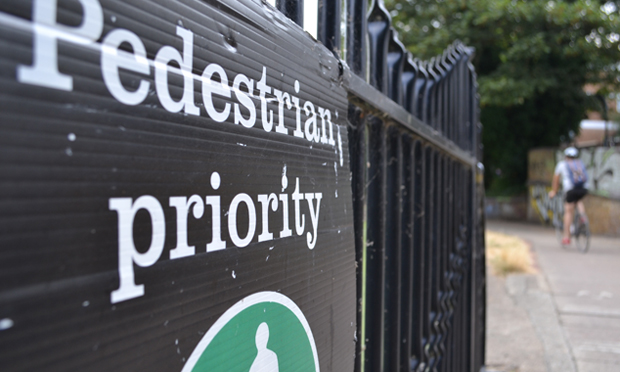 Cycling is permitted on the towpath, though pedestrians have priority. Photographs: Josh Loeb

London’s motorists are not often known for being respectful towards the cyclists with whom they share our roads.

But the seemingly unstoppable rise of cycling and tilt towards walker-friendly cities could herald a new era of conflicts between people on two wheels and those on foot. Already there have been objections to a new “cycle superhighway” (CS1 in Transport for London parlance) in Stoke Newington on the grounds it could endanger children strolling to a park, while on the Regent’s Canal towpath relations between pedestrians and those on their bikes can be notoriously wobbly.

Last year a Victoria Park canal boater’s kitten was run over and killed by a hit-and-run speeding cyclist, and complaints are regularly aired on Twitter and elsewhere about the menace of riders using the towpath as a racetrack.

Dick Vincent from the Canal and River Trust concedes there is a problem on busy inner London stretches.

“You know how terrifying it is to be passed by a big truck when you are cycling around London?” he says. “It’s the same for pedestrians being passed by a speeding cyclist on the towpath.”

But Vincent is quick to add: “Because Londoners are starting to make some sensible choices in how they travel doesn’t necessarily mean there’s more we can do in terms of the towpath.”

Jono Kenyon, coordinator of the Hackney Cycling Campaign, says: “Hackney’s population is going to increase massively in the next 20 years. How do we get all those people around?

“How do we get more people moving around our city more effectively, with finite resources?

“I think one of the ways we can do that is by enabling cycling to happen for more people.” 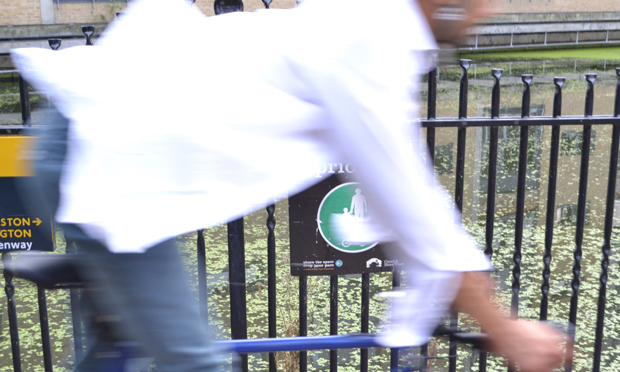 Some cyclists think as a point of principle the CS1 should have been routed along main roads in Hackney rather than through residential streets. Hackney Council and TfL are reducing access for cars in Wordsworth Road, along part of the CS1, on a trial basis to make it friendlier for bicycles. But this has prompted claims from opponents that traffic will merely be funnelled onto the A10, potentially causing even more pollution there. Another possibility, however, is that more people will take fewer car journeys and choose other modes of transport instead.

According to Ben Addy from sustainable transport charity Sustrans, the CS1 scheme and others like it will bring innumerable benefits.

“The overwhelming risk to pedestrians and children comes from motor vehicles,” he says. “That’s got to be the point of focus. Slowing and removing through-traffic will have a very significant impact on road safety for pedestrians and children. I think it’s easy to be distracted by other things.”
The “mini-Holland” scheme in Walthamstow is an example of a successful project, Addy adds.

“It means there are more opportunities for children to play outside and better air quality,” he says. “There are many more benefits – even things like you are less likely to know your neighbour if you’ve got a busy road outside your front door.”

Brenda Puech from Fume Free Streets, a group which supported controversial proposed road closures around London Fields, believes that in car free cities “in a far distant utopia” conflicts between cyclists and pedestrians will be “hugely reduced”. But she acknowledges: “Once cars are out of the picture, new conflicts will develop between cyclists and pedestrians as one group moves so much quicker than the other that conflicts
are inevitable.”

All this might be described as a fantastic problem to have. Some 20 years ago, parents were worried about their children being hit by cars, but now some areas are so free from cars and busy with cyclists that it is little wonder some parents now worry about their children being hit by bikes. Perhaps within another two decades Puech’s “distant utopia” might finally have been reached.