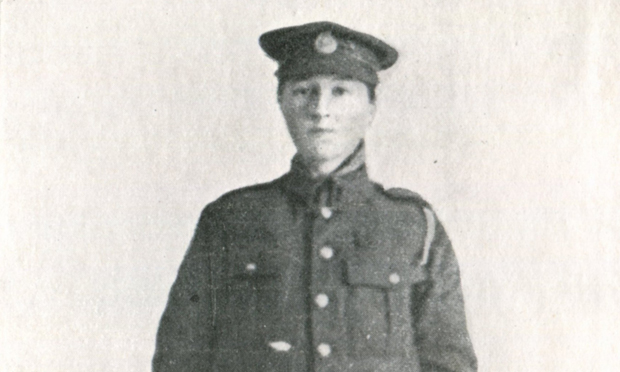 A female journalist who disguised herself as a soldier and travelled to the front on a bicycle during the First World War is the inspiration for a film premiering next month at Hackney Picturehouse.

Blue Pen focuses on ten women journalists whose voices have been silenced through censorship, confinement in institutions and abuse.

Although largely set in the present day, the film’s title refers to the wartime government’s practice of censoring letters and reports from the front.

“I was considering the number of women journalists who are disappeared and executed to this day,” says Julie McNamara, the artistic director of Hackney-based theatre company Vital Xposure.

“So we began to make an experimental short film looking at censorship and blue pen, and Dorothy Lawrence’s story was the springboard.”

When the war broke out, Dorothy Lawrence was 19-year-old aspiring journalist brought up in the care of the church by a guardian whom she later claimed had raped her.

Although very few journalists were allowed to the front Lawrence felt she had every right to report on the war, and – in the era of the suffragettes – believed there was nothing a woman couldn’t do.

“She got the boat to Calais, bought a bicycle and then cycled to the front line,” says McNamara.

“Everyone she met along the way thought it was a jolly jape and that she’d never make it.”

Arrested by French police two miles short of the front line, she was ordered to turn back. Then in Paris she befriended a group of soldiers in a café. She persuaded them to smuggle her a uniform piece by piece and teach her how to march.

Lawrence arrived at the front in perfect disguise and enlisted under the name Sapper (Private) Dennis Smith. But two weeks later a young soldier wanting to earn his stripes “dobbed her in it”.

“All hell was let loose. She was investigated and of course they suspected she was a spy. Then they thought she was a ‘camp follower’, the term they used for legalised prostitutes working on the front line.”

The silencing of Dorothy Lawrence took various forms. Her writings were heavily censored, to the extent that she was never taken seriously. She was also threatened with court martial (even though women couldn’t serve in the armed forces) and placed in a nunnery in France, before being escorted back to Britain.

By 1925, Lawrence’s dreams of Fleet Street looked increasingly remote. Her heavily censored book Sapper Dorothy Lawrence: The Only English Woman Soldier flopped commercially, and after confiding to a doctor that her church guardian has raped her she was taken into care and later deemed insane.

She was committed first to the London County Mental Hospital and then institutionalised at the Colney Hatch Lunatic Asylum in Friern Barnet. She died at Friern Hospital in 1964 and was buried in a pauper’s grave in New Southgate Cemetery.

“Blue Pen is more an art film than anything else and is not a dramatic film,” says McNamara.

“It then moves on to give ten names from the last decade who have each been disappeared, the majority executed, and so the final question you’re left with is: what is it with the dangerousness of women telling the truth?”

Alongside the premiere of Blue Pen, the launch will also include a screening of Emma Humphreys the Legacy, a documentary short about a teenage sex worker who spent ten years behind bars for killing her boyfriend and pimp, whose case eventually changed the law for those in abusive relationships who kill.

There will also be a panel discussion and live music from Lorraine Jordan, a singer-songwriter who wrote Anna’s Song, a tribute to assassinated Russian journalist Anna Politkovskaya.