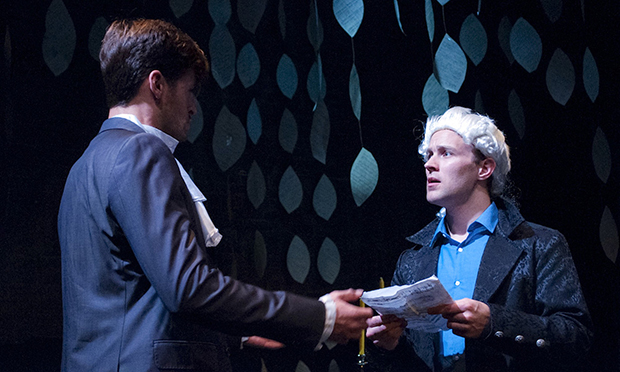 The Grimeborn festival is an amazing venture: over seven weeks the visitor to the Arcola can see – if they’ve got the stamina – 16 shows for as little as £10 a throw (with a ‘passport’).

As implied by the tongue-in-cheek name, it is no luxurious experience; but it succeeds in getting opera back to its experimental roots.

Consider Fire Ring, a genuine rarity – a 1930 opera produced by London Armenian Opera (which makes it sound like we have been missing a large repertoire all these years). In truth, the music in this opera is not that great with a repetitive style.

The plot is a puzzle and does not reveal why such ill-starred lovers from opposite sides of the conflict should bond so deeply. But the production has tremendous brio, not least from the spirited chorus who stand Greek-like above the fray.

Mozart and Salieri is a gem. Peter Shaffer’s play is well known as is the overacted film Amadeus, but few realise these pieces derive from this short opera by Rimsky-Korsakov with a libretto by Pushkin.

With such talented progenitors, it is no wonder that the original has a humanity and gentleness that the more theatrical variants don’t have.

The medium of opera works so well as the music gradually shifts back and forth between Rimsky-Korsakov’s long tones and sharper Mozartian passages. Depending on just two singers (outnumbered by the three instrumentalists), it keeps an intimate tone.

Grimeborn still needs to deliver the standards, the operas that people have heard of that get bums on seats. These productions come with danger in that they are intended for the opera house, but in the Arcola large voices can drown everything out, as Natasha Jouhi does in title role of Tosca, and where the single piano can make the opera sound like a silent movie.

In fact, pianist Richard Leach brings out the tenderness in Puccini’s music, and Stephen Aviss as has a classic tenor voice, which he reins in carefully. The production is spare, but it does not matter. Why all the dry ice – surely the Napoleon’s cannons are a long way off?

The Marriage of Figaro is even more of a stalwart and Opera24 & Darker Purpose deliver a solid production that conveys the right amount of energy and delivers the necessary comic timing. There is no need for much of a set though; the imaginary doors being opened are a bit irritating.

The parts are clearly sung – the loose English translation produced vernacular phrases that made the audience laugh. The star of the show is Sofia Troncoso as Susanna, who has a supple voice and acting ability.

For a bit of silliness, The Perfect Picnic, with its send up of opera and the middle classes, starts well. But the jokes wear thin – it could have been done in an hour like other short pieces in Grimeborn’s excellent programme.