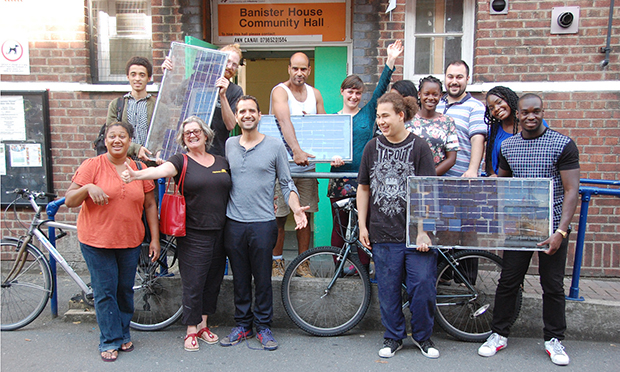 Cosmopolitan East Londoners like to think they are ahead of the game in their fashion and tastes, but there is one area where the capital has fallen distinctly behind the curve: renewable energy generation.

This is partly due to the fact that a large proportion of Londoners rent rather than own, and many of those who do own their homes live in flats. But that does not tell the whole story.

According to a recent report by NGOs Greenpeace and Energy for London, only one in 200 London homes is currently powered by solar energy.

The most recent available data (from 2014) shows that only 1.3 per cent of the UK’s solar output is generated by photovoltaic (PV) installations in London, representing a tiny 0.13 per cent of the electricity used in the capital.

Hackney isn’t the worst London performer but falls behind Lewisham, Greenwich, Wandsworth, Lambeth and Islington. There are just 276 PV installations serving Hackney’s 106,439 homes whereas in Waltham Forest, by contrast, there are 1,298 PV installations, 1,000 of which were funded by the council.

What is to be done?

Following the government’s recent cut to the feed-in tariff – the money solar power producers earn from selling electricity back to the grid – investors and homeowners alike have been less enthusiastic about photovoltaic energy, yet this energy source has huge potential for reducing fuel bills and carbon emissions alike.

London’s new mayor, Sadiq Khan, has announced the establishment of a company to be called ‘Energy for Londoners’ that will aim to provide the capital’s residents with a more competitive choice of energy suppliers, fairer tariffs, and lower-carbon energy, but it remains to be seen how much solar power will be part of this mix.

Much can also be done locally to promote renewable energy generation. Hackney has huge numbers of roofs that are eminently suitable for solar panels, and strong communities could well provide the vital social infrastructure needed to develop solar projects.

Already, a solar energy cooperative at Banister House Estate in Homerton represents a model of what is possible.

The scheme, which kicked off in 2014 under the guidance of non-profit groups Repowering London and Hackney Energy, has been funded by a share offer that raised £149,500 in amounts from £50 to £40,000. This paid for the installation of solar panels on 14 buildings, and will give investors an estimated return of four per cent per year.

Other ideas are also afoot. Hackney Energy believes the borough might be able to raise a ‘solar bond’ similar to that launched recently in Swindon, which raised £1.8m to fund Swindon Community Solar Farm.

A further model is offered by Camden, Islington and Waltham Forest councils, which teamed up to source £160,000 funding from a government source to trial a project to fit solar panels, battery storage systems, smart metering and monitoring to 40 homes with the aim of reducing energy bills by 20 per cent.

Vivienne O’Brien of local solar panel installer Athena Electrical agrees there is much that Hackney Council could do: “[The council could] incentivise home owners to install solar photovoltaic systems or energy storage systems on their roofs – possibly by reducing council tax by a small percentage”, she said.

O’Brien also believes the council could provide seed funding as well as administrative and legal support to community groups to get projects off the ground. They might be renewable energy micro-grids, where solar system owners ‘sell’ excess energy.

O’Brien thinks the Town Hall should promote renewable energy systems for all new build properties and extensions as a local planning requirement: “I still see loads of new builds with no solar installations on the roof”, she said.

The Town Hall is already taking some taking action to promote renewables.

They have put in place a carbon offset mechanism for new developments. If developers are unable to achieve the required carbon savings onsite, they are able to provide carbon savings either offsite, or as a one off carbon offset payment to fund carbon reduction initiatives elsewhere.

The policy has only been in place for a year, and according to the council, developers unable to achieve on-site carbon savings have all opted for a payment: “the council is in the process of negotiating with a number of sites, and it has agreed terms with three: 114-116 Curtain Road, 1 Mentmore Terrace and One Crowne Place”, said a council spokesperson.

Yet far more could be done. With the price of solar panels falling rapidly and energy security increasingly a priority for many residents following the EU referendum, this form of energy still looks attractive. We can therefore expect to see a range of innovative new local solar initiatives in the months and years to come.