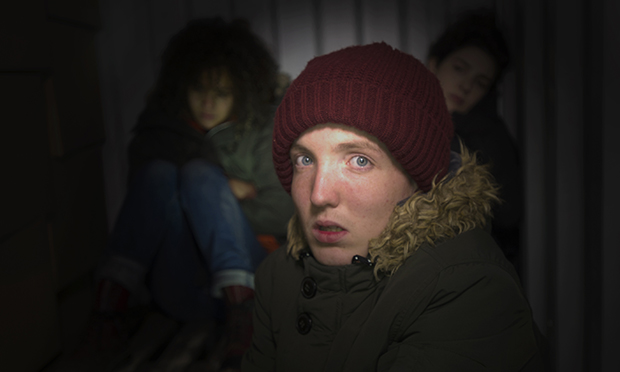 Just minutes from the ‘Refugees are Welcome Here’ sign on Dalston Lane, a mocked-up shipping container is being set up in the basement of the Arcola theatre.

This month a new play called Cargo will tell a story that reflects the plight of as many as 90,000 children who have fled to Europe from countries such as Syria, Afghanistan and Eritrea.

The play recreates a border crossing in real time, in a replica of the type of container many have already used to attempt a crossing. The play focuses on two young refugees amongst the group inside – but no one inside the container knows who they have got in there with.

Playwright Tess Berry-Hart, who also founded the charity Calais Action, said she was compelled to write the play after meeting a 12-year-old boy on her first trip to the refugee camp in France.

“The police were tear-gassing and some of the tents were being bulldozed,” she recalls. “I met this kid. He’d come across the Sahara in a truck, to Italy in a wooden boat, then travelled with smugglers to Calais.

“I was so frightened by what this meant for the world, that 12-year-old kids were travelling on their own with gangs of desperate people.”

The number of unaccompanied minors seeking refuge in Europe is not known for sure. The European Asylum Support Office said 85,482 unaccompanied children applied for asylum in 28 EU countries (plus Norway and Switzerland) in 2015, a number that is likely to have risen this year.

Berry-Hart’s background is in verbatim theatre – her latest play used interviews with gay Russian citizens to expose the extent of homophobia there. She says the toughest bit about writing this play was making something pacy and compelling without it coming across as “preachy”.

“The play’s set in a closed space and closed time,” she explains. “So trying to get everything out about the backstory of the characters, the arc of their journeys, the conflict of the play, and what happens in the container within the actual journey time – without it looking pushed or unnaturalistic – is quite a challenge.”

Although the stories in the play are fictional, they have been produced after dozens of conversations with refugees, and the cast and crew have also benefited from consultation with people who have actually experienced such crossings. The methods refugees use to get inside crates, how smugglers treat them and what happens when they get caught, were all taken from first-hand accounts.

But its thrilling plot aside, will Hackney theatre-goers choose to spend a summer evening sweating under stage lamps? One hopes, for the source material, that they will.